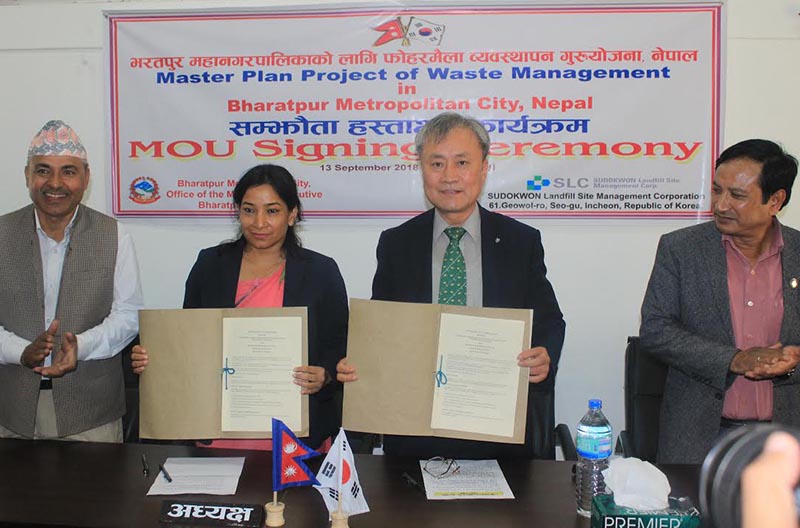 Mayor Renu Dahal of Bharatpur metropolis and Chairman of Sudokwon Landfill Site Management Corporation Seo joo Won showing the signed agreement, in Bharatpur, Chitwan, on Thursday, September 13, 2018. Photo: THT
Chitwan, September 13 Bharatpur Metropolitan City has signed an agreement with a Korean organisation to conduct a study on managing garbage of the metropolis in Bharatpur, Chitwan. The agreement was inked with Sudokwon Landfill Site Management Corporation. Bharatpur Metropolis Mayor Renu Dahal and Seo joo Won, chair of the corporation, signed the agreement paper today. As per the agreement, the Korean company will carry out a detailed study on garbage of the metropolis and prepare a report in a year. The team will study the nature of everyday and seasonal garbage, and prepare a report for effective management of garbage. The Korean government is sponsoring the study worth Rs 70 million. Mayor Dahal said a detailed study would be carried out to manage the garbage of Chitwan and neighboring districts. Seo joo Won said his organisation was managing garbage produced by 2.5 million people. Around 65 tonne of garbage collected in Bharatpur Metropolis everyday is being managed by the metropolis and the private sector. The metropolis has managed garbage on the banks of the Narayani River at Ward No 3 of the metropolis.
#Chitwan #Bharatpur #Bharatpur Metropolitan City #Waste management agreement #Korean organisation #managing garbage #Landfill Site Management Corporation
You May Also like: