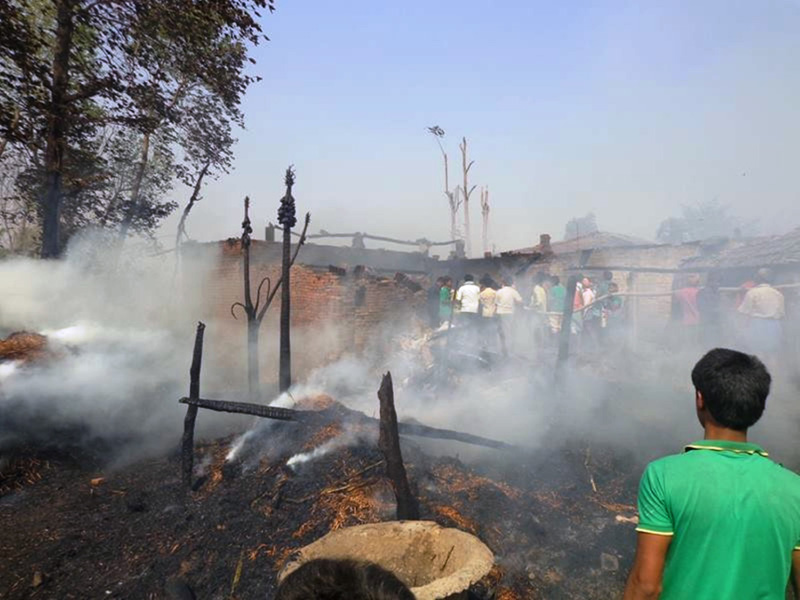 Locals try to contain the fire in Harshaha of Rautahat district on Saturday, April 9, 2016. Photo: Prabhat Kumar Jha
RAUTAHAT: At least three incidents of fire were reported from assorted locations of Rautahat district on Saturday. Police have urged members of the public to stay alert as fire incidents are more likely if a sunny day is accompanied by strong winds. SP Ganesh Regmi, Chief at the District Police Office, requested public not to make fire from 8 am to late afternoon as the winds go higher in those hours. Property worth Rs 700,000 had been destroyed as a residential house caught fire in Harshaha of the district this afternoon. The house of Binda Sah was completely destroyed while two adjacent houses also sustained partial damages. Preliminary police report claimed that the inferno was sparked from an electric wire being transmitted in the village. Meanwhile, a hay pile had caught fire in Garuda Municipality-12 in the district today. In a similar case, the house of Pramila Thakur had caught fire destroying valuables worth Rs 100,000 this morning.
#Rautahat district #Fire guts property #fire incidents #Rautahat fire
You May Also like: