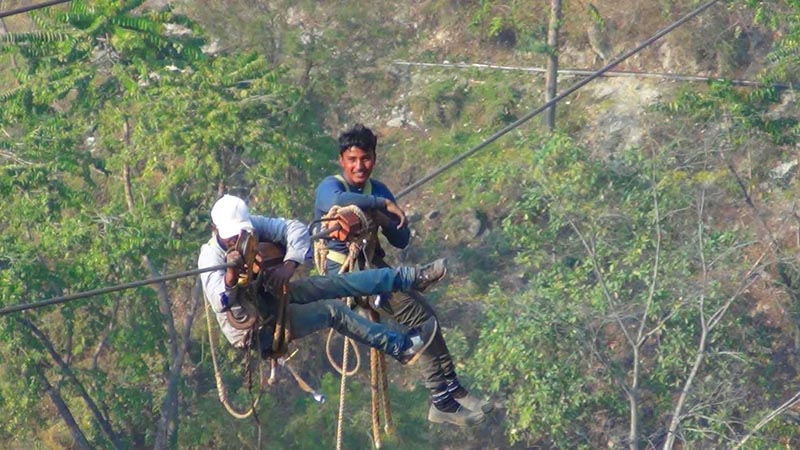 Workers laying power cable for under-constrcution Kabeli Corridor project in Thapatar, Panchthar, on Tuesday, March 5, 2019. Photo: THT
Panchthar, March 5 Construction work of Kabeli corridor has reached the final stage. The corridor will help integrate the electricity produced in the eastern hilly districts to the national grid. As soon as the work on construction of corridor from Jhapa’s Lakhanpur to Panchthar’s Amarpur is over, power generated in Panchthar, Taplejung and Ilam will be connected to the national grid. Work on the transmission line was supposed to be completed four years ago, but it did not happen. As a result, Hewa A Hydro power that started generating power two years ago is incurring a loss of Rs 50 million every month. Hewa Khola Hydro Project Manager Roshan Shrestha said expediting of construction work had elated people who have invested in hydel projects. With the completion of the project, a total of 150-megawatt power from various hydro projects will be evacuated to the national grid Work on erecting pylons and laying power cables from Lakhanpur to Godak had been completed two years ago. Similarly, contractor company representative Yagya Prasad Bhattarai said of the total 127 pylons,125 pylons had already been erected. Nepal Electricity Authority Engineer Sushant Thakur claimed that they could start evacuating power to the national grid through Kabeli corridor within two months.
#Kabeli Corridor transmission line #Kabeli Corridor
You May Also like: