Food security programmes could be promoted through the promotion of capital assets and off–farm and non-farm job opportunities. Only in this way will it be able to reduce food shortage vulnerabilities in Nepal 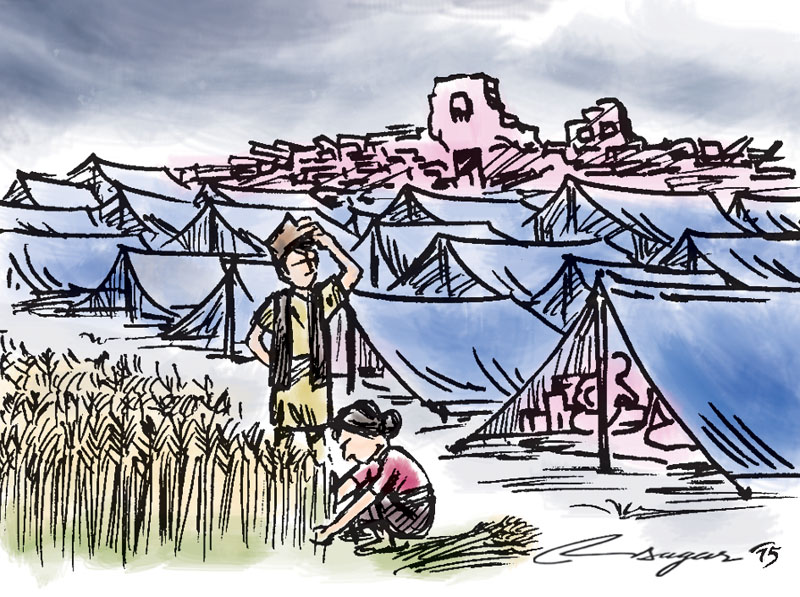 Nepal is a chronically food insecure country. According to World Food Programme (WFP) 2008 the surplus area of Terai and lower Hills cannot cover the food demand of the upper Hills and Mountains which are mostly food deficient. The country has limited scope to bring new areas under cultivation. This fact together with the underdeveloped irrigation infrastructure, frequent localised disaster incidents, high population growth and almost stagnant land productivity, mainly because of soil lost, has turned the country from an exporter to an importer. Nepal is a net food importer and highly dependent on external market fluctuations that leave its population at chronic risk of food insecurity. At the same time the country is a highly exposed to multiple disasters which impact on agricultural production, services and road accesses leaving a significant number of people at risk of food insecurity and constrain the development of the country.

Major multiple disaster incidents in Nepal were once more highlighted in the world disaster map, this time as never before in history. This is in many ways related to the information technology which allowed us to follow disaster incidents. From disaster risk reduction science perspectives there could have been no such opportunity in terms of the ways of understanding the localised impacts of the multiple disasters on food security in Nepal. Multiple disasters induced food deficiency is not only at the household level. The twin Nepal Gorkha earthquakes and subsequent aftershocks destroyed over four hundred thousand farmers’ houses where considerable amounts of seeds were stored for this year’s farming activities. The earthquakes damaged over 600 government buildings that used to support local agricultural services.

Thousands of hectares of agricultural land developed cracks affecting agricultural production, particularly in the central and eastern Hill and Mountains of the country. In many areas, it is reported that traditional water sources dried just after the earthquakes.  Thousands of people severely affected by the earthquakes had to construct temporary shelters in their agricultural land and allow agriculture land to support neighbours for the same purposes.  Most of the people affected by landslides, floods and diseases come from farming communities of rural Nepal, who had been already affected earlier by the  Gorkha Earthquakes.

People living in the high Hills and Mountains mostly represent ethnic communities of Nepal.  They are those who have been most affected by the Gorkha Earthquakes and their cascading effects, particularly on household food security in Nepal. According to post Nepal Gorkha Earthquake Household Impact Assessments research conducted by the writer in ten high impact districts from the earthquakes show sixty–nine per cent of the population have poor nutrition or are malnourished. Local food insecurity is also worsening among other vulnerable groups who are dependent on remittance incomes.

The farmers in the area are unable to secure food because of total destruction of capital and physical assets by multiple disasters. Such disasters have aggravated the existing problem of food insecurity in the area by drawing down its assets.  People have to choose from non–farm and off-farm strategies for human security such as migration to the nearest urban centres such as Kathmandu as a result of the weak relief governance and poor humanitarian targeting techniques used by many humanitarian agencies that have been working in post-Gorkha Earthquake relief context. Weak relief governance and poor humanitarian aid targeting have not

only put people in vicious cycle of poverty, but also played a catalytic role for the originating new dynamics in ongoing social conflicts in Nepal.

Poverty in Nepal has persisted for decades, and it is recognised as a deep-seated and complex phenomenon, for which there are no quick and easy solutions. However, it is clear that the agriculture sector is pivotal to the Nepalese economy and the country needs a risk neutral Agricultural Policy that will take care of production and producers without losing  sight of the need for food security and related issues.

In Nepal, disasters are accelerated by social vulnerability and residual risks from previous incidents. Understanding cascading effects of localised disasters, particularly in the agricultural sector, requires comprehensive knowledge on the evolution of local vulnerability, not only the geophysical and ecological process, but also the condition of the local people, agricultural practices, economy and infrastructure.

Eradicating extreme poverty and hunger has become the high priority of the 189 United Nations member states and at least 23 international organisations since their endorsement of the Millennium Development Goals by 2015. In this sense, Nepal has to take immediate, effective additional measures to maintain adequate food security at both national as well as local levels in the post-earthquake livelihood recovery programmes.

Food security programmes could be promoted through the promotion of capital assets and off–farm and non-farm job opportunities. Only in this way will it contribute not only to reduced food shortage vulnerabilities in Nepal, but also well-being to fully address poverty alleviation in the area affected by the earthquakes.