Brain gain: Not an easy mission 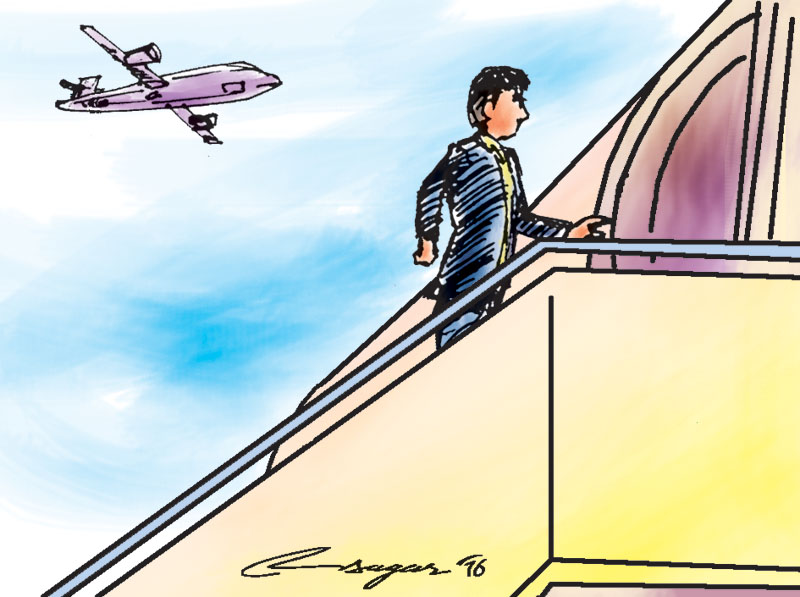 Climbimg Plane. Illustration: Ratna Sagar Shrestha
Brain drain is a situation when well-skilled and educated professionals leave their countries to reside and work in other countries. In the literature of migration this is known as the origin country while the latter is termed as the destination country. The terminology of ‘’brain drain’’ is also known as human capital flight and is a widely used buzz word in the literature of international migration. Developed and/or industrialized countries like USA, CANADA, UK and Australia are applying several policy instruments such as diversity visa (DV) lottery, high- skilled migration program (HSMP) to attract global talents. Developing countries, in contrast, are constantly losing their talents from decades. Brain gain is an idea of reversing the situation of brain drain. It is a thought of bringing knowledge and skills back home and utilise them for the development of origin countries. There are several factors that positively influence the migration decision on educated and skilled manpower. These factors can mainly be divided into two strands. The first strand is known as pull factors which include a set of positive characteristics associated with destination countries such as higher paying jobs, social security, superior economic outlook, less political instability, well regarded foreign training, intellectual freedom, and rich culture and so on. These factors together optimize the expectation of professionals and/or educated persons in origin countries that they will enjoy better-quality and dignified life in developed countries, if they migrate. The second strand is the push factors which comprise negative characteristics coupled with developing or origin countries. Some of them include unemployment, political instability, discrimination in the labour market, lack of research and development opportunities, lack of freedom, poor working condition etc. Because of these two factors a problem of ‘’brain drain’’ in developing countries is believed to be perpetuated despite the fact that it has been realised as the problem of their economic development. It is continuously observed that thousands of youths from developing countries leave their home to seek better livelihood abroad each year. A study carried out by Organization for Economic Cooperation and Development (OECD) in 2000 shows 23 million high-skilled immigrants in 89 destination countries where 21.5 per cent of the total migrants were aged fifteen and over. Similarly, if the migrants with intermediate skills are also included, the percentage of skilled migrants rises up to 56.5 per cent. The trend of migration has been further amplified following the period of this study. It shows that developing countries are continuously losing skilled manpower in an increasing trend over time. Developing countries like Nepal should seriously think about bringing those talents back home in order to achieve her development goals. It is very important to retain Nepalese talents at home and to utilize the expertise of Nepalese diaspora for the development of country. It can be achieved either by attracting them to come back or bring their knowledge, even if their physical presence is not possible at present. However, it is not an easy mission. Educated people will stay in their home country only if drawbacks of brain drain outweigh their benefits. In other words, the elimination of push factors associated with developing countries and the convergence into positive factors prevailing in developed countries can retain professionals in origin countries. Nevertheless, a full conversion to pull factors or a total elimination of push factors is not possible. Even narrowing down the gaps in such characteristics between developing and developed countries is itself a very lengthy process. Despite these, Nepal can take various approaches in order to minimize the detrimental effects of brain drain on her economic development. One approach is to accumulate findings of various researches associated with Nepal which are taking place annually in different academia across the world. It may include various socioeconomic sectors of Nepal which is not known to our development planners due to the lack of proper mechanism in acquiring such research findings. Some of these findings could have a significant policy implication and Nepal should utilise it as feedback for public policy management. Therefore, government should initiate utilising the knowledge of Nepalese diaspora by setting up a mechanism to encourage collaboration between research institutions based in Nepal with similar Nepalese institutions abroad. Transfer of knowledge can also be attained through developing a network between the scholars from Nepal and Nepalese scholars working abroad. Institutions such as British Nepal Academic Council (BNAC) and the recently formed Global Policy Forum for Nepal (GPFN) could be some options for partnership and collaboration. Similar institutions can also be found in countries other than UK. Additionally, government should encourage Nepal-based academic institutions to work together with them. By doing so, Nepal can bring the knowledge and skill acquired abroad by Nepalese citizens home and utilise the concept of brain gain for her development. Mainali holds a PhD in Development Economics from City University, London.
#diversity visa (DV) lotter #Brain
You May Also like: