By Sunil B Pant

That fear propels flawed systems to persist (the parasitic capitalism) or otherwise serves 0.1 per cent of the entire human population.The development crisis we face today is man-made and we, the humans, must be the solutions 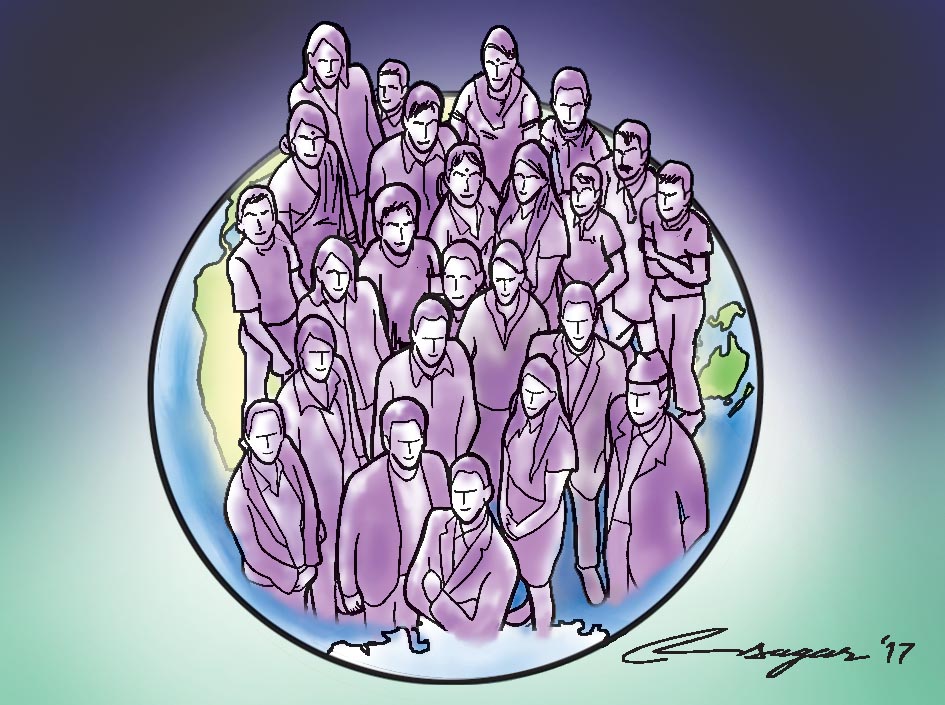 Illustration: Ratna Sagar Shrestha/THT
The global leaders, finally on 5 October 2016, endorsed the Paris Agreement to tackle climate change. The Paris Agreement builds upon the United Nations Framework Convention on Climate Change and — for the first time — brings all nations into a common cause to undertake ambitious efforts to combat climate change and adapt to its effects, with enhanced support to assist developing countries to do so. The world was excited thereafter until the United States of America, under President Donald Trump’s administration, decided to pull out itself from the Paris Agreement earlier this year. Yet another example, in the autumn of 2016, the world’s governments came together to agree to 17 ambitious sustainable development goals, which promised to overcome a vast array of problems — from poverty and hunger to health and gender equality — by 2030. But if history is a guide and a similar path is followed, these goals may be overly ambitious. An earlier set of Millennium Development Goals included one on education and stated that by 2015 all boys and girls should complete a full course of primary education. Yet fifteen years after 164 countries agreed to work towards education for all, just one-third achieved the six goals set. Climate change, poverty, hunger, water shortages, lack of education, lack of health-care, gender inequity, human rights violations, war, refugee, migration etc.  appear to be  problems but they are actually not the problem in itself, rather they are the results caused by the root problem known as ‘fear’. Fear makes people with resources and power violent and stupid. Fear is caused by insecurity, greed, hatred and delusion. All these three cases of greatest human defilement are caused by ‘ignorance’. All these, setting targets after targets, have no meaning until we tackle the root cause of the problem. Why is America pulling out of the Paris Agreement? It’s because of fear that they are losing jobs and economy — and the Trump administration is fueled by greed and an indifference to the impact of oil and gas on our shared planet. Why does China want to champion the Paris Agreement? In part, because they want to replace the American domination on the world stage and become the major dominant player. It is the fear of losing domination over others and fear of being dominated by others that pushes countries to increase their defense spending incrementally every year but they are not ready to allocate similar amounts of what all the countries would spend on their defense (it is actually offence!) to tackle the food, water, shelter and health problems of the world. These are only the problems we are thinking about humans and human interests only. But humans cannot survive and ignore the eco-system, environment, other species, trees and plants, rivers, mountains, valleys, forests, lakes, deserts, sea and air. Can we really think about them independent from our needs and greed? Have we seriously looked at how much forest the world has lost over the past 100 years, how much bio-diversity the world has lost and the consequences of that? How much populations of other animals, birds, fishes and other living beings have declined and shrunk to extinction over the last 100 years. So many that some scientists refer to this as the Sixth Great Extinction event. Yet the human population is exploding disproportionately. As a dominant species and being that can think, when do we learn to think in ways free from fear? When do we learn to think how to overcome our fear and think about not controlling others but empowering them to be free, think about not hating others but learn how to embrace each other, think about not only ‘me’ matter but everybody and everything matters as we all together become the universe, not just human but everything. All the development approaches and setting ambitious targets have failed to recognize an important human trait that is ‘imagination’. We always imagine a world that is selfish and horrible until we can outgrow our fear. Sustainable development is definitely not about higher GDP growth which can be easily achieved by exploiting the poor and natural resources and using all kinds of policies, techniques and technologies. Sustainable development must also not be about just human needs in a solely human-centric way, it is about the entire world and every living and non-living being-centric. All these values are diluted and contaminated by corporate approaches and companies who just want to make money. Before setting up further targets and development goals, may we, as the UN and world leaders and every human being, develop a universal program that empowers us to overcome our fear as a particular individual, as a particular society, as a particular nationality, as a particular ethnicity, race, religion or geography and as a human which is as perceived, accurately or not, as “superior” beings than the rest - a global program that teaches ‘love and let love, live and let live’. Both fear and love are universal. How many schools, communities across the world really teaches how to overcome fear and how to love and let love unconditionally. That fear propels flawed systems to persist (the parasitic capitalism) or otherwise serves 0.1 per cent of the entire human population.The development crisis we face today is man-made and we, the humans, must be the solutions.
#Climate change #human population #United Nations Framework Convention #Paris Agreement #Development crisis
You May Also like: