Earthquakes in Nepal: Unlearned and undocumented

Making people aware of the probabilities during an earthquake would be more sagacious than telling them their houses are earthquake-resistant, which is a relative term and should be understood differently for different scenarios 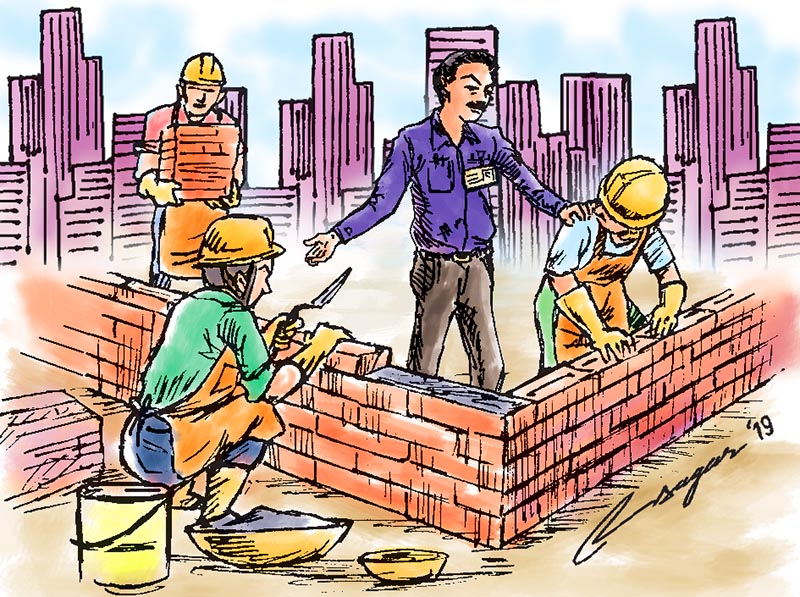 Illustration: Ratna Sagar Shrestha/THT
In commemoration of the great eastern Nepal earthquake of January 15, 1934, Nepal is observing Earthquake Safety Day with the primary focus on awareness. While unzipping the stored energy beneath Nepali territory, this article accentuates some basics of earthquakes in Nepal, focusing on the multifaceted challenges. Concern surfaced mainly after the 1934 Earthquake that claimed nearly 8,519 lives in Nepal and damaged nearly 300,000 buildings. In the meantime, contemporary write-ups give account of some amelioration techniques. However, the case continues and most likely perpetuates beyond the Gorkha Earthquake as well. Pacing back to the earthquake damages of 1988, it can be said that the victim buildings were the ones which already had sustained some sort of damage during the 1934 Earthquake but were relentlessly used. It is also obvious that a considerable fraction of the collapsed buildings in the Gorkha Earthquake had already been hit by either the 1988 Udaypur Earthquake or the 2011 eastern Nepal earthquake. The unanswered question is: why is Nepal not learning from the past earthquakes and endorsing landslide changes like Chile? The response could be simple: it is because a large fraction of the substandard construction, with compromised structural systems, even survived the 2015 Gorkha Earthquake, and people are way sure that the next big one is not even in the pipeline. Several researches after the Gorkha Earthquake depicted that an earthquake bigger than the Gorkha one was in the pipeline; however, people seldom believe them. There are two major concerns here: the first is that the Gorkha Earthquake was not a big one for seismologists. That means, Nepal is prone to a significantly greater earthquake than the Gorkha Earthquake. The second is that people forget everything after six months of an earthquake. The situation is further jeopardised by the current understanding of practising engineers in Nepal. Most of the people who claim to be consultants believe that only reinforced concrete buildings are earthquake-resistant, and masonry, timber and others are not. A well-known researcher and practitioner in structural earthquake, engineer Jitendra Bothara, recently posted some thought-provoking ideas regarding the current understanding and focuses on Nepal regarding structural engineering practices. Most of the current curriculums do not really address the demand of our time and location. For instance, an engineering professor from Nepal’s reputed university was forced to pull down his wooden house constructed after the Gorkha Earthquake due to some subsidy issue. He was forced to go for brick masonry as the engineers refused to believe that wooden buildings are also earthquake-resistant. This comes as no surprise as I have even witnessed a brick masonry construction just below the Shailung Mountain in Dolakha district right in front of a timber factory. A grave challenge of our time is also wrong consultation. Our manpower is trained into believing that if people were to follow the templates, their life safety is guaranteed. Making people aware of the probabilities during an earthquake would be more sagacious than telling them their houses are earthquake-resistant, which is a relative term and should be understood differently for different scenarios. Most of the owner-built constructions in Nepal are uncared ones. The contractors use phrases like, ‘the same survived the great earthquake’ and so on and discard the advice of the structural engineers. Following directions and being alert are the only ways to cope with natural hazards. However, as mentioned earlier, most of the people forget an earthquake after six months. The technical manpower does not focus on cutting-edge research regarding construction and design innovation. Most of the Nepali structural forms are yet to be discovered, thus their behaviours during earthquakes would be just a prediction. Our research group covered some 13 vernacular building technologies from Dho-Tarap in the high mountains to Triveni of the Terai, and made a presentation on the vulnerability of the buildings last year. We have yet to understand the future of buildings in western Nepal during an earthquake due to their inherent vulnerabilities associated with construction systems and lack of periodic strengthening. Learning from the past is the way to cope with natural hazards. In the international arena, case histories are considered for learning and acting before the next event. However, documentation is not very reliable, and thus people are suspicious in using information to formulate policies and practices. Documentation and endorsement are badly needed to alert the new generation of scientists, practitioners and stakeholders. As the country commemorates 21st Earthquake Safety Day, Nepal should now focus on developing a thorough understanding unmarred by the wrong advice of unconcerned people. Stratification of priorities and practices and training of technical manpower for diverse earthquake-resistant construction systems would be the solution for now. Damage in a structure could claim lives. An earthquake directly doesn’t do so, and fortune favours the prepared only! Gautam is a researcher in Structural Earthquake Engineering
#Nepal earthquake #Earthquake Safety Day #earthquake-resistant #Earthquakes in Nepal
You May Also like: