Until we have something better, the seasonal flu jab is our best bet. By being vaccinated annually, we not only protect ourselves but also children and the elderly via herd immunity 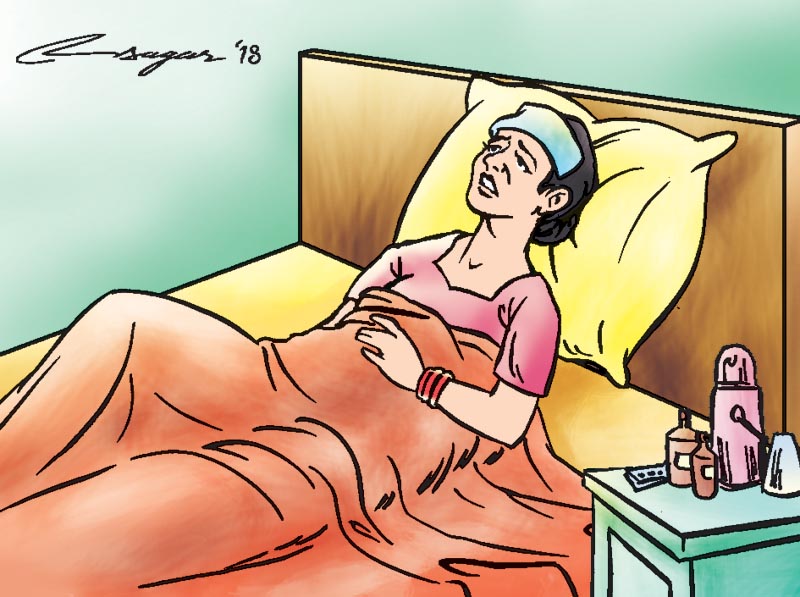 Illustration : Ratna Sagar Shrestha/THT
Influenza is an acute respiratory infection that affects airway and lungs. It is an airborne disease, which means it can spread through coughing, sneezing and contact with nose. Thus, it has a high rate of transmission. The symptoms may include fever, cough, headache, body ache, nausea, blocked airway by mucus and difficulty sleeping. Children and elderly are most susceptible to influenza virus—children because of lack of immunity and elderly because of declining immunity. People with weak immunity, those under immune-suppressive drugs and pregnant women are also at higher risk.  Every person is exposed to influenza virus in their childhood. Around 20 to 30 per cent children and 5-15 per cent adults experience seasonal influenza annually. The World Health Organisation estimates the annual severe infections to be 3 to 5 million, with 290,000-650,000 deaths. Many of us confuse common cold with flu since the symptoms are similar. But common cold is never severe or life-threatening. Reported cases of severe flu are only the tip of the iceberg. A study has shown that three quarters of infections are mild or asymptomatic. However, these asymptomatic infections can still contribute to virus transmission. Why are we at risk every influenza season? First we need to understand the background of subtypes and the nature of influenza virus. There are two main proteins on the surface of influenza virus called hemagglutinin (HA) and neuraminidase (NA). During infection, HA helps the virus to enter the cell and NA, newly produced virions, to exit from the cell. There are four types of influenza: A, B, C and D. Only A and B types cause seasonal epidemic in human. For Influenza A, there are 18 known HA and 11 known NA subtypes. Every influenza virus is named after the HA and NA genes they possesses, for example H1N1. Besides these two genes, there are six other genes which are important for virus structure and life cycle. Although the possible combinations of virus subtypes are 11x18, only three viruses circulate seasonally in humans: H1N1, H3N2 and Influenza B. Wild birds (ducks, water fowls) are the natural hosts for other types of influenza viruses, which we refer to as “avian influenza viruses”. These avian viruses have potential to jump from birds to human and cause pandemic flu. The two viruses with pandemic potential are H5N1 and H7N9. Another key point to remember about this virus is that it has RNA genome, which is error prone. Unlike DNA viruses like smallpox, chicken pox, hepatitis B and others, influenza virus has propensity of mutating its gene. Because of the mutations, mostly the surface proteins HA and NA have different landscape/footprint every year. Our immune system fails to recognise the mutated virus leaving us susceptible to the same virus again. When we are affected, our immune system defends. Our immune system comprises of innate and adaptive immunity. The innate system is like guards present all the time to stop intrusion, whereas adaptive immunity is specialised army appointed upon attack. There are two easy to remember cells: B and T, which are two arms of adaptive immunity. T cells offer cell-mediated immunity, which means they recognise and kill infected cells. The recognition is facilitated by the infected cell displaying the chopped pieces of virus proteins. B cells offer humoral (relating to body fluid) immunity. B cells secrete special proteins called “antibodies”, which bind to the virus and infected cells and inactivate or neutralise the virus. The antibodies are mainly targeted towards the surface proteins HA and NA. When these proteins mutate then antibodies are redundant. Every year, the WHO makes recommendations on virus strains to include in vaccine, six months before the influenza season. The recommendations are based on the characteristics of viruses sampled from around the world through the WHO Global Influenza Surveillance and Response System (GISRS). Under GISRS, the virus surveillance in Nepal is done by National Influenza Centre. Two vaccine recommendations are made every year for Northern and Southern hemispheres. Different companies make these vaccines available, which contain the components of H1, H3 and one or two influenza B viruses (trivalent or quadrivalent). The vaccine efficacy ranges from 30-60 per cent depending on several factors including, who is being vaccinated, how good is the match between the vaccine strain and the circulating virus, and which virus is dominant. But at times, a flu-jab may not work because of the way they are manufactured. Traditionally and until now, most vaccines are produced in fertilised hens’ eggs. When viruses infect eggs, they undergo mutation to adapt. The egg adaptation mutations alter the footprints on HA protein, thus inducing the false immunity which does not recognise the circulating virus. This is an area which needs regulators and manufacturing companies’ unmet attention. Until we have something better, the seasonal flu jab is our best bet. By being vaccinated, we not only protect ourselves but children and elderly via herd immunity. “Something that doesn’t kill you only makes you stronger,” it is said. This implies to flu also — the natural virus infection induces immune response much stronger than vaccination. Rijal is a researcher at the University of Oxford
#World Health Organisation #lungs #influenza #Flu Shot #Airway
You May Also like: