First bird flu death: What next?

The “One Health” approach has proved to be effective in reducing zoonotic diseases by working together with infectious disease clinicians, veterinarians, public health and medical microbiologists 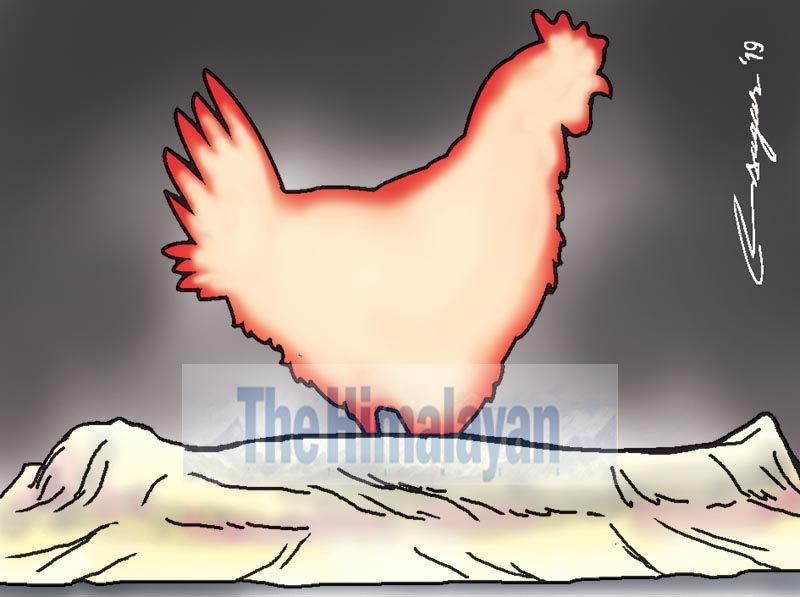 Illustration: Ratna Sagar Shrestha/THT
On May 3, the Ministry of Health and Population called an unexpected press meet to announce that a 21-year-old male had died of influenza A “H5N1”, popularly known as “bird flu”. This is the first reported case of a human casualty from a bird flu infection in Nepal. It would be worth mentioning here that this author had previously examined two other suspected bird flu cases, but they could not be verified by laboratory testing due to its unavailability. The author again met a female patient, with a 7-day history of high-grade fever, cough, shortness of breath, and showing signs of pneumonia in the chest x-ray. According to her, she had disposed of chickens herself after their sudden unexplained deaths. These are some recent developments of possible bird flu infections that reinforce one to think “what next?” Hong Kong was the first country to report H5N1 bird flu infection in humans in 1997. Since then, it has been known to spread to more than 60 countries. Avian influenza H5N1 virus was first reported in chickens in mid-January 2009 in Nepal, the third nation in South Asia to do so after Pakistan and Bangladesh. This incident immediately triggers several questions: What was the source of infection? Does the virus have the ability to spread from birds to humans or even human-to-human? Is chicken meat or egg safe for consumption? Interestingly, one of the visitors at our hospital showed fears of bird flu infection after handling live chickens. Some people even began avoiding consumption of chicken or eggs. Indeed, this incident occurred nearly a month ago, and the concerned body has not felt the need to address such panic. It is essential to prepare for a public situation that can trigger such anxiety and panic attacks. The screening for H5N1 virus on a regular basis is necessary for farmers, chicken handlers, transporters, chicken sellers, frequent visitors to live bird markets, butchers and veterinarians, especially during bird flu outbreaks. Importantly, healthcare providers are always at increased risk of contracting bird flu infection. According to the Epidemiology and Disease Control Division (EDCD), out of 179, 172 (96%) samples have been taken from healthcare providers and sent to Japan to screen for the virus. It shows that healthcare providers are at the highest risk of bird flu infection. Nepal is not capable of confirming the H5N1 virus, which may delay in identifying it. A couple of weeks ago, there was a sudden death of a large number of crows due to the H5N1 virus in Kathmandu, something not known previously. At present, it is unclear how this highly pathogenic avian influenza H5N1 virus was introduced in the crow population of Kathmandu. Policy makers usually believe that bird flu infection spreads through transportation of an infected chicken or bird from one place to another. However, many research studies have shown that wild migratory birds are a major source of spreading avian influenza from one place to another or even between regions. There is not much information on wild migratory birds that are potentially spreading bird flu infection in this country. In the case of Nepal, the present case is the first H5N1 virus infection in humans, but certainly may not be the last one, meaning a future infection or an outbreak of this deadly virus in humans is possible anytime, anywhere. Those who are in the risk groups must take precautionary measures. Until now, it is believed that the H5N1 virus does not spread from human to human, although the question itself remains debatable. It is interesting to mention here that data from the WHO (from 2007 to 2012) showed that most of the H5N1 victims were children less than 5 years old, meaning, there is still a huge knowledge gap about its exact nature of transmission. Influenza A(H1N1)pdm09 virus, popularly known as “swine flu”, now spreads from human to human. Recently, the Ministry of Health has carried out an investigation following the confirmation of the H5N1 infection in humans to find out the source of the infection and to trace its possible clusters, but without coordination with other sectors, such as the Department of Livestock Services. The author was informed about a bird flu outbreak in a poultry farm in Kathmandu a couple of months ago, where two farmers were suspected to have contracted the bird flu virus (based on WHO case definition), though they were unable to go through laboratory testing due to its unavailability. The “One Health” approach, which recognizes that the health of the people is related to the health of animals, has proved to be effective in reducing zoonotic diseases by working together with infectious disease clinicians, veterinarians, public health and medical microbiologists. It is even helpful in bringing outbreaks under control in time and effectively. Nepal, therefore, should introduce the “One Health” concept that can be established under an institution, such as a Nepalese Centre for Disease Control and Prevention (NCDC). It is wise not to wait for another H5N1 bird flu case, rather it is worth developing bird flu guidelines of safety measures for healthcare providers, farmers, veterinarians, transporters, sellers and butchers, and train them according to the changing times, although such guidelines may vary depending on the nature of their work or profession. Pun is Chief, Clinical Research Unit, Sukraraj Tropical & Infectious Disease Hospital
#Ministry of Health and Population #zoonotic diseases #Bird flu #bird flu death #First bird flu death #influenza A “H5N1”
You May Also like: