Depletion of natural resources or increases in pollution has to be factored in conventional GDP to arrive at a real sense of sustainable GDP, which in fact is Green GDP 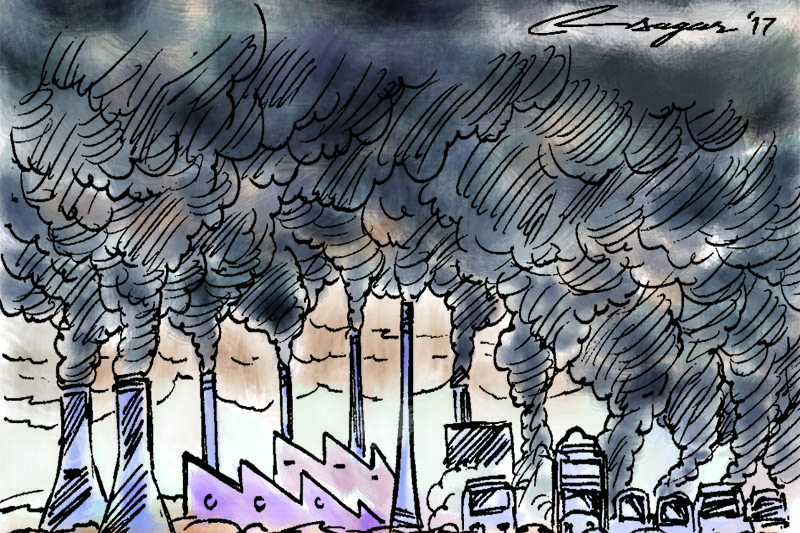 Illustration: Ratna Sagar Shrestha/THT
Usually a nation’s economy is measured and calculated in terms of Gross Domestic Product (GDP) numbers. In fact, it is an index of economic growth. GDP is a monetary measure of the market value of all final goods and services produced in a period (quarterly or yearly). It is measured by adding together the nation’s personal consumption expenditure, government spending, net exports, and net capital formation. Nominal GDP estimates are commonly used to determine the economic performance of a whole country or region and to make international comparisons. The GDP of a country measures the produced output but ignores the ingredients needed to generate such output like water and air. Green GDP takes into consideration the environmental impacts on the productivity of the country. It is derived from GDP itself after adjusting the cost of environmental degradation and pollution damage. In other words, Green GDP equals GDP less Natural Resource Depletion Less Pollution Damage. It is pertinent to note two important things with respect to Green GDP. First, it provides us with another perspective on GDP, and one that can improve environmental protection and rational resource utilization. Secondly, sustainable development is the emphasis on Green GDP, and this involves not only our generation, but also all future generations. Regarding difficulties in Green GDP what remains difficult is calculating resource and environmental costs or health damage caused by industrial pollution, and infrastructure development may take years to appear. It is impossible to pinpoint the year in which there are no environmental costs incurred as a result of pollution. There are situations in which an enterprise’s pollution does no harm locally, but damages more distant areas. Pollution may be aggravated or ameliorated by natural influences such as wind or rain. Sustainability has become an important concept in economic growth and development in the world. Sustainable development means the development that meets the need of the present without compromising the ability of future generations to meet their own needs. Human economy receives its inputs from the natural environment and disposes of its waste to environment; cannot operate without regard for resources and carrying capacity of nature. Sustainable development implies that the use of non-renewable resources should be equally distributed among generations and the use of renewable resources should be to the extent that it does not hamper the capacity of the concerned resource to regenerate itself. The main purposes of Green GDP accounting are to provide a more correct measure of welfare and to examine the sustainability of the economy. Now, Green GDP accounting has become a significant basis to develop and implement the sustainable development strategies in the world. The World Health Organization (WHO) estimated that air pollution caused around 7 million premature deaths worldwide in 2012, most of them in developing countries. The latest Environment Performance Index (EPI) 2016 released during last week of January, 2017 at the World Economic Forum puts Nepal 177 among 180 countries in terms of air quality. Nepal is hard hit by air pollution and climate change. Nepal is extremely vulnerable to the effects of climate change but it is among the least prepared countries to deal with them. Current climate variability and extreme events are already causing major impacts and economic costs in Nepal, estimated to be equivalent to an annual cost of 1.5 to 2% of the GDP, it is estimated that the economic costs of climate change in Nepal for three sectors (Agriculture, Hydroelectricity and Water-induced Disaster) could be equivalent to 2–3% of the current GDP by mid-century. Further, the additional investment to build resilience in current/future plans in the three sectors (agriculture, hydroelectricity and water-induced disasters), from now to 2030, was estimated to be a total of US$2.4 billion. The Kathmandu Valley has very notorious air pollution problems and is considered as one of the most polluted cities in the world. Air pollution is the topmost environmental health risk, and second largest global burden of diseases (GBD) in Nepal which was responsible for nearly 25,000 premature deaths in 2013, according to a new study on GBD published in September. The world and the global society as a whole has witnessed a phenomenal growth in development activities post industrialization. But the flip side of development is the damage it has done to the ecology and environment. In future, presenting only the economic growth in terms of conventional GDP may not be the sustainable index of overall development. Depletion of natural resources or increases in pollution has to be factored in conventional GDP to arrive at a real sense of sustainable GDP which in fact is Green GDP. Although Green GDP calculation is in very nascent stage, we have to develop an accurate accounting and valuation system, utilizing knowledge resources to develop more standardized valuation techniques for calculation of environmental costs and pollution damage. Pokharel and Bhandari are chartered accountants
#Gross Domestic Product #sustainable development #World Economic Forum
You May Also like: