Apropos of the news story “Minister in hot water for paddy field antics” (THT, July 2, Page 1), they say “old habits die hard”. What can you expect from a peasant minister? As a member of cabinet, he obviously felt empowered to denigrate women with his dirty sexual innuendos and obscene behaviour. In the paddy field, he must have fantasized himself as somebody who is the centre of attraction of women. He had to quit after he received flak from the media and from his own party. We now move on to the next news “Decks clear for Murarka to become next FNCCI chief, (THT, July 2, Page 10). Nepali society, which pays a lot of lip service for gender equality and empowerment of women, has lost all sense of chivalry. While FNCCI has clearly become a turf for proxy political wars, I can only fume that FNCCI machos have robbed a lady of the opportunity of heading the ‘premier’ trade organization. Now we go back to the photo, on THT July 2, Page 1, of a person, trying to seduce a girl-child on the plinth of the sacred Krishna Mandir now declared a prohibited zone. His body language does not hide his intention while that of the girl-child suggests that she is trying to protect herself from this man. This brings us to our question: where is the law? There are tourists and civil police offices on either side of the temple. How can they allow this couple to sit on a prohibited zone? Also do our civvies keep eye on abnormal couples in the temple precincts and other public places? J. Talchabhadell, Bhaktapur 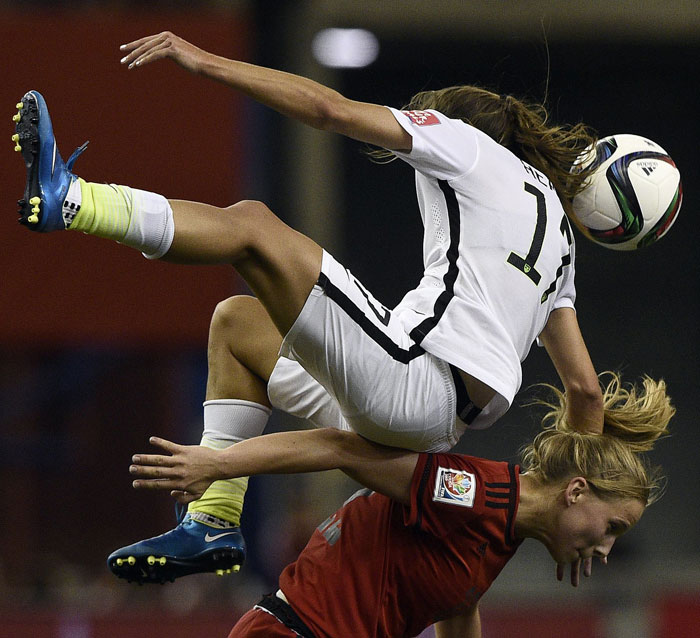 America’s Tobin Heath (top) vies with Germany's Almuth Schult during their 2015 FIFA Women's World Cup semi-final match at the Olympic Stadium in Montreal on Tuesday. Photo: AFP
Coverage Do you think men and women are equal? Should they be treated equal? I guarantee more than 95% of the educated class would emphatically resonate YES. But I suspect the materialization of the rhetoric. “Sports and its coverage” is one among many that make me feel so. The Women’s World Cup is underway in Canada and Copa America of South American nations including Jamaica and Mexico is following suit in Chile. In spite of the fact that Copa America is a regional show, it has dominated in every space of the media whereas World Cup despite being a global show is shadowed inch by inch, column by column. Considering media coverage, one can assume the region is overtaking the globe. Such under-representation of women’s sports and strength particularly by the media explicitly delivers that men and women are not judged at par. One research says stories focusing on men’s sport outnumbered stories addressing women’s sports by a whopping 23:1 ratio. Why such underestimation of women’s strength and sports? Why is there a lack of interest when it comes to upgrading women’s potentialities? Is it because women athletics are uninteresting by birth, or it is because under-reporting has failed to recognize women’s sports? On one extreme of the pendulum’s swing we say gender disparity must be rooted out, on the other extreme, such is the plight. Jay Bahadur Shah, Jajarkot
#Women's World Cup #Minister of Agriculture Hari Prasad Parajuli
You May Also like: