India in space: A job done 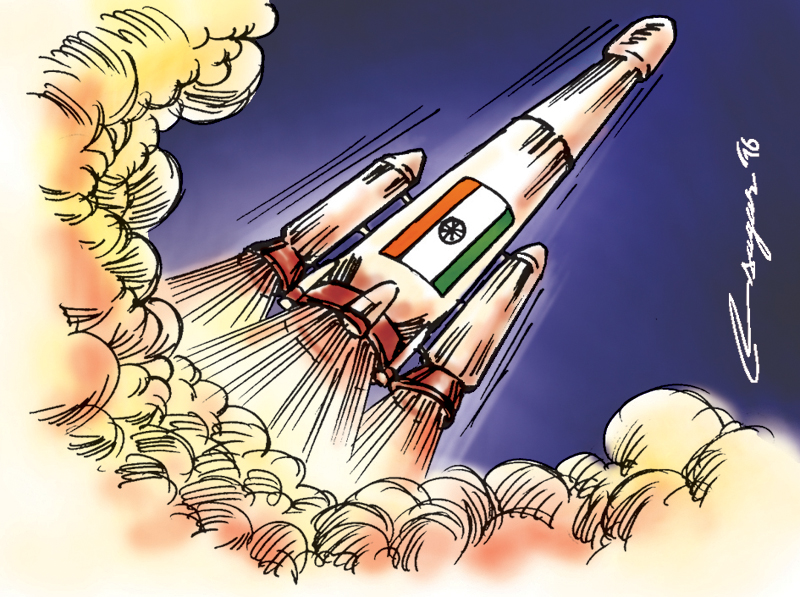 From completing India’s very own satellite based navigation system to launching the country’s pioneering mini space shuttle to making history by putting twenty satellites in orbit in a single launch. Coming soon a revisit to the moon is among the romantic outings India has on its anvil.

On a hot and humid partly cloudy Wednesday morning on June 22, 2016, exactly at 9:26 a.m. an Indian rocket lifted off from the island of Sriharikota on the coast of the Bay of Bengal in Andhra Pradesh and in 26 minutes created history for the Indian space agency.

The Polar Satellite Launch Vehicle (PSLV) in 26 minutes put in orbit 20 satellites. This is no mean achievement. It is like dropping school children from a school bus that is travelling at a phenomenal velocity in space. ISRO chairman Dr. A.S. Kiran Kumar, simply described the successful mission “A job done”.

The PSLV in its 36th launch weighed 320 tonnes, and was as tall as 44.4 metres, which is the average height of a 15 storey building. With this launch ISRO achieved 35 consecutively successful launches of India’s smaller rocket.

In this record breaking mission ISRO lofted 17 satellites from foreign vendors which included, Germany, Indonesia, Canada and of these 17 birds, 13 satellites belonged to the United States of America.

According to Dr. Jitendra Singh, Minister of State in the Prime Minister’s Office and in-charge of space affairs `through launch of these 17 foreign satellites, Antrix Corporation Ltd. has earned revenue of 10.24 million Euros and 4.54 million USD.’

This was the single largest number of satellites to be launched by an Indian rocket for America.

Increasingly foreign vendors are opting to launch their smaller satellites using Indian launchers, this is not surprising since it is estimated that it costs up to 50% less to launch satellites through ISRO. The PSLV has become a reliable, bankable and precision launcher which makes India an attractive destination for countries looking for a cheap and reliable option to launch satellites.

ISRO has launched a total of 113 satellites in space of which 74 have come from 20 different countries.

The calm of a hot and sultry morning at Sriharikota was shattered exactly at 7 am on May 23, 2016 when India’s brand new rocket that carried India’s mini space shuttle into space blasted off from India’s rocket port.

For the very time in its history ISRO actually grew wings as it embarked on a never before space flight that made history. The Indian space agency undertook the maiden launch of its very own indigenously made version of a `Space Shuttle’, a fully made in India effort.

Congratulating the scientist Prime Minister Narendra Modi said `the dynamism and dedication with which our scientists at ISRO have worked over the years is exceptional and very inspiring’.

Yes, the big powers abandoned the idea of a winged reusable launch vehicle but India’s frugal engineers believe the solution to reducing cost of launching satellites into orbit is to recycle the rocket or make it re-usable.

Scientists at ISRO believe that they could reduce the cost of launching stuff into space by as much as ten times if re-usable technology succeeds, bringing it down to $ 2000 per kilogram.

Maybe sooner than later the RLV should now be named the `Kalamyaan’ after India’s legendary former President APJ Abdul Kalam an aeronautics engineer par excellence who made top class rockets and dreamt big of India being propelled to become a developed country.

For ISRO no dream is too big as it carefully forged ahead to have a fully `swadeshi space shuttle’.

Recently ISRO made a very special dash to complete India’s NAVIC – “Navigation with Indian Constellation” when the last of the seven satellites was successfully placed in the orbit by the Polar Satellite Launch Vehicle on April 28, 2016. The Indian satellite constellation is already providing day and night coverage of the navigation signal throughout the Indian region.

This is a unique achievement by ISRO.

Modi took forward a germ of an idea from former Prime Minister Atal Bihari Vajpayee’s tenure when during the Kargil conflict with Pakistan, New Delhi was denied access to the best quality satellite based navigation system signals it desperately sought to annihilate with pinpoint accuracy the reinforced bunkers on the high hills made by the Pakistanis.

The first round of the National Democratic Alliance government laid the foundation for the swadeshi GPS which Modi has fulfilled.

Later this year ISRO is all set to test India’s monster rocket the Geo-synchronous Satellite Launch Vehicle - Mark III capable of putting up to 8 tons in low earth orbit.

Next year if all goes as per plan the country’s second mission to the moon Chandrayaan-2 will lift off which will among other things soft land India’s tricolour on the lunar surface, India reaching for the stars!

Courtesy: Embassy of India in Nepal