In Nepal, road accidents are quite common given the poor condition of roads and public buses. On Monday, 27 passengers were killed and 39 others sustained injuries when a passenger bus veered off the muddy and slippery road after it failed to hold on the road in Birta Deurali, Kavre.

It all happens because the regulatory body’s presence in the rural roads is almost nil. Most of the traffic police are concentrated in the city areas checking the bill books and driving license. 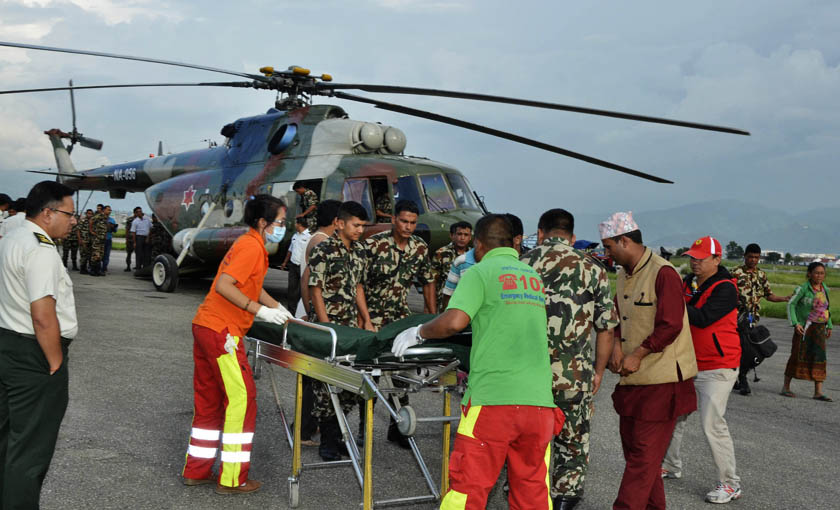 Such a fatal accident taking the precious lives of 27 people and injuring 39 others who are undergoing treatment at various hospitals would have been easily avoided had there been traffic police monitoring the movement of passenger buses.

The bus driver himself should have been more cautious about the condition of the road, especially during the rainy season when unpaved roads become very fragile and mudslips often block the roads.  The traffic police’s duty is not only to check the bill books and driving license but also to ensure if the roads are safe for travelling.

Had the traffic police barred the public buses from plying on the road on the ground of poor condition of the road so many people would not have lost their lives. The people would have to either travel on foot or they would have waited for some time until the roads are improved for movement.

It is reported that there were about 100 people travelling in the ill-fated bus from Kathmandu to Birta Deurali. Whenever any air crash occurs the government forms a panel to investigate it.

But no investigation is carried out at the government level even if dozens of people get killed in road accidents. If an inquiry is made about the causes of fatal bus accident, it will recommend some measures to prevent such accidents in the future.

It never can be any pleasing news when we hear about people travelling to and from their homes being killed in road accidents. Monday’s Kavre bus accident that killed 27 persons and injured 39 seriously, “27 killed in Kavre bus plunge” (THT, August 16, Page 1), was very unfortunate.

They lost their lives either by their own fault or by the careless driving of the driver. So far, thousands of passengers have been killed in different parts of the country where the condition of roads especially in the hilly areas are extremely dangerous.

Road accidents occur in the plains also due to reckless driving. However, drivers are not alone to be blamed for the dreadful road accident. The bus in Kavre was carrying more than 80 passengers.

Some of them were even sitting on its rooftop which should have been prevented by the traffic police assigned along the highways.

Unless the police personnel, who are supposed to be vigilant for ensuring that the drivers have properly followed the traffic rules and regulations, show their sincere presence along the highways, this kind of road accident will continue to happen in the days to come.

They should always keep their eyes open and try their best to ensure that the drivers have fully followed the existing traffic rules.