The Nepali Congress and Nepal Communist Party have been entrusted with mandates to govern several times. However, all of them have failed to steer the state for a single term of five years 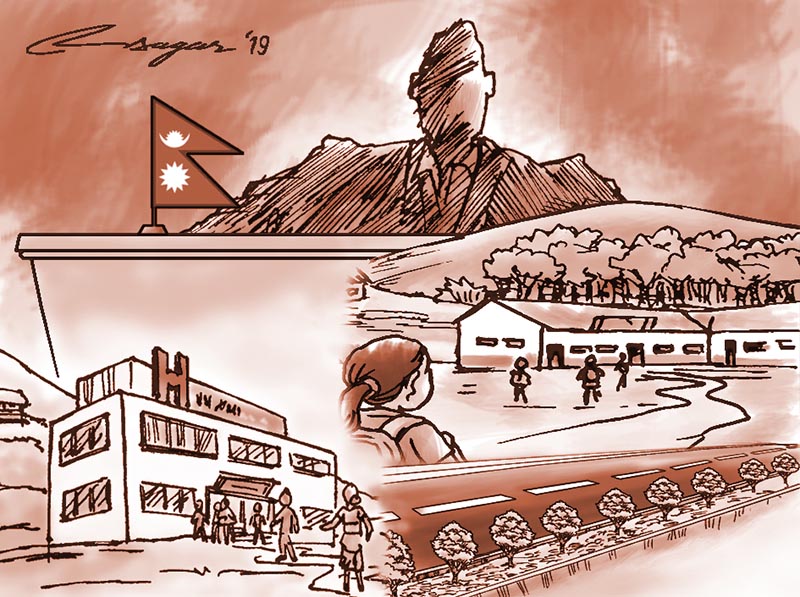 Illustration: Ratna Sagar Shrestha/THT
Nepal’s rulers have largely failed to understand the country’s ecology. Nepali rulers over the decades have constantly encountered regional, ethnic and gender equality and social inclusion (GESI) issues. Within a decade of the overthrow of the Rana oligarchy in 1951, five prime ministers failed to set up a democratic system in Nepal. The monarchy appointed five prime ministers - Matrika Prasad Koirala, KI Singh, Tanka Prasad Acharya, Subarna Shumsher Rana and BP Koirala. Then King Mahendra took over power and introduced the Panchayat system, which took the course of a partyless system for three decades. His successor, King Birendra, failed to rule the country democratically again as mandated by the Nepali citizens in the 1981 referendum. The Panchayat system too collapsed in 1990. The Constitution of Nepal (1991), which was considered a world model, failed to institutionalise democratic norms and values and to maintain the rule of law. A decade-long insurgency followed and uprooted the constitutional monarchy, and a federal democratic republic has been ushered in. All tests and trial periods have been unable to address the aspirations and demands of the people of the mountains and the plains. Thus, it is a proven fact that the rulers have failed to understand the ecology of Nepal. The people of the mountains in west Nepal and Madhesi activists of Province 2 even today are out of the mainstream of the Nepali governance system. Nepal is a country of diversity. Geo-physical stages  - three ecological tiers; socio-religious threads - vertical and horizontal social systems plus about a dozen religions;  antagonistic geopolitical location; pretty vague ethno-caste system (more than 10 dozen castes and ethnic groups); and different elevations  ranging from a low of 60 metres to 8,848 metres) create complexity and compound problems for the vacillating leaders or rulers.  Under the democratic system, the Nepali Congress (NC) and Communist Party of Nepal (CPN) have been entrusted with mandates or opportunities to govern several times (since 1951) by the Nepali voters. However, all of them have failed to steer the state for a single term of five years. The Nepali ground reality is vague and cannot easily adapt to an exotic or hybrid model of governance systems or development models. Since the experiment of the block development project (Tribhuwan gram Vikash) in 1953, supported by American and Indian grants and assistance, Nepal has turned into an arena of tests and trials. Billions and billions of dollars have been poured into “integrated”, “GESI”, “community”, “sustainable” and so many other gibberish models in a bid to find a solution to governance issues. The result or achievements have been political instability, the Maoist insurgency, shifting of the unitary government system to a federal set up and vague nationalism. The prosperity and well-being of both our neighbours - India and China - are on the rise. But the people living on the border of both sides of Nepal must live in embarrassed silence. The Nepali voters of this region know nothing about politics and governance - capitalist, communist, unitary or federal systems. They frequently shift their voting pattern because they want nothing more than the fulfilment of their immediate development needs by the politicians. There is a constant movement of people across borders. They are migrants. It is a common phenomenon that people from the hills migrate to the low lands and rural people to the urban areas, and now most youths are going abroad in search of better opportunities. Have these social phenomena been under the scrutiny of Nepali rulers? Ironically, our so-called politicians or rulers seems to be under the pressure of their family members, kin and kith to go against the commitments made during the election campaigns. It is unfortunate for the Nepali citizens to have always been under family rule since the unification of this tiny country in 1779. A ruler must have free and independent thought, a strong network of access to his security and media establishment, and an expert courtyard of counsellors. Under the surveillance of the central authority, we have had governance systems that are more or less intact in the hills and across the country, barring a few areas. But why have the so-called representatives failed to govern these areas properly? The constituents from these regions always elected popular representatives to the government. But the discrepancies and anomalies of these regions continue to be: low levels of awareness; politicians acting as swindlers with voters living in illusion and darkness; ultimately there is an erosion of trust and confidence between the rulers and the ruled. Furthermore, misuse and abuse of development grants and assistance, tax money, uneven resource allocation, corruption and impunity prevalence are rampant, leading to anarchism. Now the new government structure, i.e., the federal system with three tiers of government, is anticipated to do better in the days ahead. The federal republic Constitution (2015) has entrusted and delegated a lot of powers and authorities to the local bodies. The local government can address a lot of the grievances which surfaced in the past. They can exercise their power and authority to manage local resources for the wellbeing and prosperity of their voters and for the dignity and prosperity of the nation.
#Nepali Congress #federalism #Nepal Communist Party #governance #GESI #governance work #gender equality and social inclusion
You May Also like: