If elected MPs and Ministers are accountable to Parliament then who in the party are accountable to the people and how? Will political parties be bound by public audits and the right to information act? Political parties are instruments of social change and also instruments of social contracts between society and state at the national and local levels 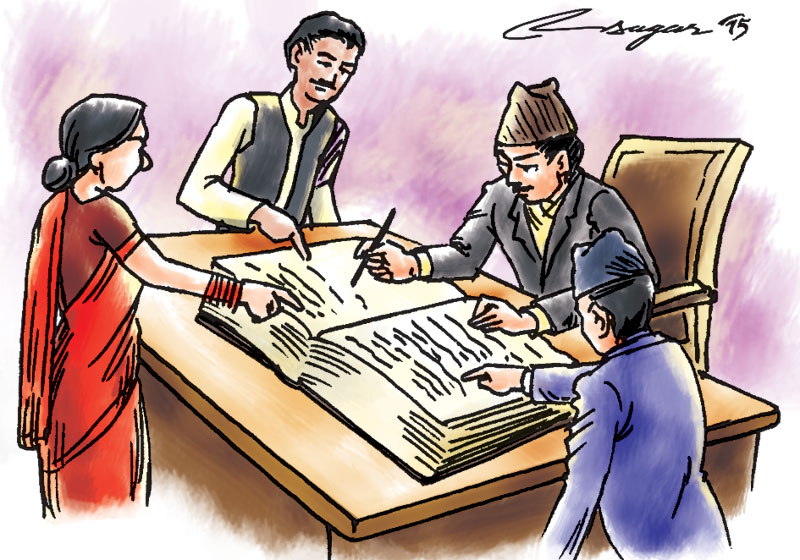 Nepal, as a nation state, was the creation of Great King Prithivi Narayan Shah in 1769 through military expansion of his Gorkha kingdom to an empire (Greater Nepal). Its expansion was ended by the British East India Company following the Anglo Gorkha War 1814-16 and the subsequent treaty of Treaty of Sugauli.

Political parties existed in Nepal since the late 1940s as the Indian independence movement went from strength to strength. However, it was not until 1990 that political parties were formally institutionalised in Nepal’s body politic with their successful restoration of multi party democracy in 1990 and adoption of democratic pluralism— multi-ethnic, multi-lingual, multi-religious and multi-party parliamentary system and constitutional monarchy with Hinduism as the State’s religion. Uniquely, it was the first and only Hindu State in the comity of nations.

Pluralism was manifest in the vast number of political parties that were born in 1990. The political scene was commanded by the Nepali Congress, left of centre socialist party, and the several communists parties. It is now to be shared with the likes of right of centre RPP parties along with regional and ethnic parties that took form mainly in the Terai. In 1990 there were more than 30 political parties vying for representation in a parliament of 205 MPs with an electoral system based on the Anglo Saxon model of first-past-the-post.

The draft Constitution should include to transform the behaviour of political parties if democracy is to survive in Nepal. First and foremost, we must recognise that good governance can’t be guaranteed by the World Bank promoted principles of transparency, accountability and competition: nor by the provision of free speech, free press, freedom to organise along with a constitutional provision for an anti corruption authority in the absence of a robust criminal justice system which, unfortunately, we don’t have yet.

Nor shall we have it when our NGOs are parallel organs of each of the major political parties funded by foreign agencies. While our political system is so mired in graft, corruption, nepotism and patronage and ruled by a political oligarchy consisting of a handful of leaders overwhelmed by feudal mindsets no matter how revolutionary their political ideologies.

If elected MPs and Ministers are accountable to Parliament then who in the party are accountable to the people and how? Will political parties be bound by public audits and the right to information act? Political parties are instruments of social change and also instruments of social contracts between society and state at the national and local levels. The misbehaviours of political parties has resulted in the body politic of Nepal being reduced to a state of lawlessness where social justice is a far cry for its citizens.

Fostering internal party democracy and how to transfer the political culture and protect against deviations arising in are foremost needs that the CA just address itself. We have seen pretty clearly how an individual leaders’ ego and ambition can way lay the new born system. Often do we notice political manifestos drawn up to garner vote banks by exploiting the poor.

Where parties are ruled by ‘kitchen cabinets’; dynastic politics; influence of non-party people and non-members they are reduced to semi-household instruments of personal power and ego. In South Asia how to prevent the lust for power and the ego drive of the dominant autocratic party leader should be taken care by the new Constitution. In India they have the provision for Governor’s rule but do we or should we copy cat their constitutional provision? All political partied must be required to commit to pluralism and non-violence.

We may define a political party as a national, regional or local conglomeration of individual interests in quest of a broad vision for whose fruition of power is necessary. In brief, here are some vital variables for the CA to ponder on while redrafting the Chapter 32.

They are (a) leadership and candidate selection; (b) fund raising, management and public accountability; (c) information on membership; (d) clear cut enunciation of core ethical values of the party with a code of conduct; (e) making public, with each change of leader, the periodic strategic plan with clear cut statement of its vision, mission and strategic goals— ironically and sadly from the national interest, it is standard practice for political parties in power taking the opposite position in public affairs when in opposition; (f) RTI duties and obligations of MPs so that ordinary citizens can participate in its governance as stakeholders; (g) code of conduct for MPs delivering constituency development projects; (h) relationship with government; (i) as a party is an organisation which needs to be managed so it must spell out a managerial performance criteria and accountability to it cadres: (j) setting up a grievance handling system to resolve conflicts; (k) require of parties to produce Accountability Papers by evaluating their Manifesto promises and results; (l) be founded in international law and standards in this new era of globalisation whose building blocs shall be regional associations.

#constitution drafting process #draft of new constitution
You May Also like: