Stand up for women’s rights: Ensure their freedom, safety

While innovation and technology provide unprecedented opportunities in countries around the world, the ongoing problems of domestic and sexual violence that exist in Nepal limit the extent of this progress 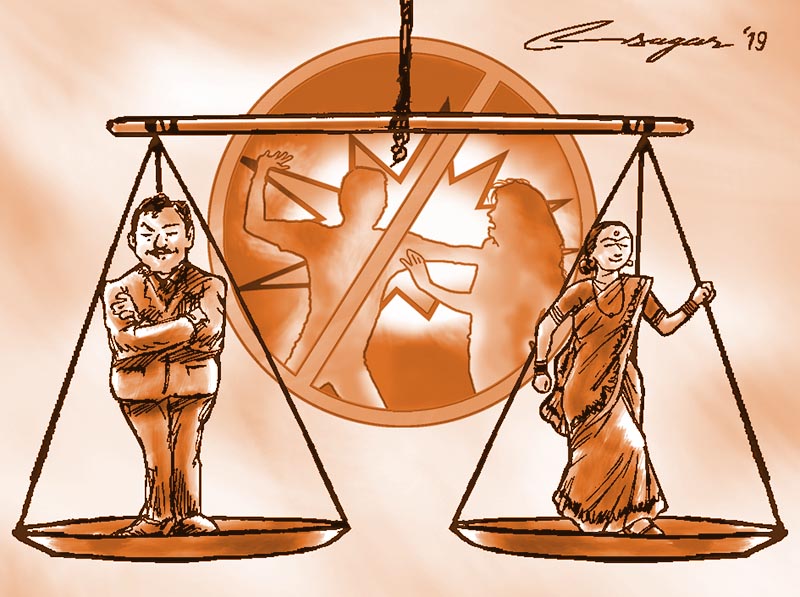 Illustration: Ratna Sagar Shrestha/THT
There is no better day than International Women’s Day to highlight the issues faced by women. I often hear that people say celebrating a single day will not put an end to the problems of domestic and gender-based violence. Yet, dedicating a day for women is widespread recognition of the existing problems women continue to face every day. It is also an opportunity to reflect on the progress made towards gender equality, to call for change and to celebrate acts of courage and determination by women who play an extraordinary role in the history of their communities. Recurrent headlines in the media paint a clear picture that violence against women and girls has become a national epidemic. In Nepal, one in four married women experience spousal violence, whether physical, sexual or emotional. Domestic violence has become so deeply normalised in Nepal, that nearly one in four women aged 15-24 believe that beating one’s wife is justified. This is not just the case in Nepal. My experiences working in almost all continents have taught me that there is nothing more universal in the world than discrimination against women. We must not allow discrimination against women to erode years of progress. The rights of women have been ingrained in the Beijing Declaration and Platform for Action of 1995, the Convention of the Elimination of Discrimination Against Women, and the Universal Declaration of Human Rights. In Nepal, the 2015 Constitution, 2018 Penal Code and banning of Chhaupadi have signalled a change in attitude towards women’s rights. To overcome domestic and sexual violence against women, written law is only the first step. It is the actions that follow – of individuals, families, communities and society at large – that make the biggest impact. Impunity is a major hurdle in the fight against gender-based violence. The weak enforcement of laws and a lack of committed resources have led to a rise in the continued impunity of perpetrators. For violence against women in all its forms to end, the impunity of these types of crimes must stop, which can only be achieved if perpetrators are systematically tried before the judiciary and brought to justice. This year we celebrate International Women’s Day with the theme “think equal, build smart, innovate for change.” The theme focusses on innovative ways in which we can advance gender equality and the empowerment of women, particularly in the areas of social protection systems, access to public services and sustainable infrastructure. The United Nations in Nepal has been continuously working to ensure no woman or girl is left behind. In line with the Sustainable Development Goals, the UN has been tirelessly investing in the promotion of women’s empowerment and gender equality via various flagship programmes. Programmes such as midwife training are working to decrease Nepal’s maternal death rates, which remain the highest in the Asia Pacific region. Innovative ideas like the Khulduli App to educate and promote the sexual and reproductive health and rights of adolescents empower youth to make smart decisions. Ongoing programmes like the Essential Package of Services for Women and Girls Subject to Violence is being rolled out alongside the implementation of a coordinated multi-sectoral response to Gender-Based Violence. Digital Women’s programme to train and support rural women in areas where financial institutions do not exist and involvement of female structural engineers to change the landscape of power-earthquake reconstruction are simply the tip of the iceberg. The UN is committed to combating violence against women and sexual violence in Nepal by fostering accountability in the UN system as an employer with the Responding to Domestic Violence: A Resources Guide for UN Personnel in Nepal. As we mark International Women’s Day, I urge everyone to stand up for the rights of women who feel unsafe or do not enjoy the full extent of their rights. Let us remember, no woman is safe in society until the safety of every single woman is ensured by the concerned authorities. While innovation and technology provide unprecedented opportunities in countries around the world, the ongoing problems of domestic and sexual violence that exist in Nepal limit the extent of this progress. With the prevalence of violence, no women or girls can reach their full potential. I praise women leaders who have overcome discrimination to reach the top of their field. I am amazed by the girl who fights to stay in school, even when it might be the hardest choice she will ever make. I commend the women who support their friend facing domestic violence and stand beside her in a court of law, fighting back. I take pride in the women I meet, the women I know and the women who work every day to make the world a more inclusive and safer place for all. We celebrate a future in which innovation and technology create unprecedented opportunities for women and girls to play a role in building more inclusive systems, efficient services and sustainable infrastructure to accelerate the achievement of the SDGs and gender equality. But, for that to happen, every woman and girl should be able to enjoy her right to freedom and life and feel safe at home and in the world at large. Make the change today: fight for women’s rights, for every single woman around you. Ms Julliand is the UN Resident Coordinator in Nepal
#domestic violence #women's rights #sexual violence #Gender Based Violence #International Women’s Day #Women's Day #Women's freedom #Women's safety #Convention of the Elimination of Discrimination Against Women
You May Also like: