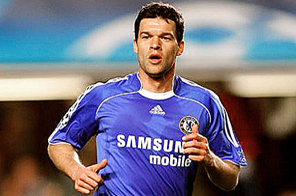 FRANKFURT: Germany captain Michael Ballack was on Sunday rated as doubtful for his country's final World Cup qualifier against Finland after injuring his ankle in the victory against Russia.

The Chelsea star twisted his right ankle during the first half of Saturday's 1-0 win over Russia in Moscow which booked Germany's berth at the 2010 World Cup in South Africa next June.

The result leaves Germany four points clear at the top of the Group Four table and automatically qualified regardless of Wednesday's result in Hamburg against Finland.

A decision on whether Ballack will face Finland will be taken after he undergoes a scan on Sunday.

Ballack, 33, won his 96th cap for Germany in Moscow and has said he will consider retiring after the World Cup.

#Ankle injury leaves Ballack doubtful
You May Also like: