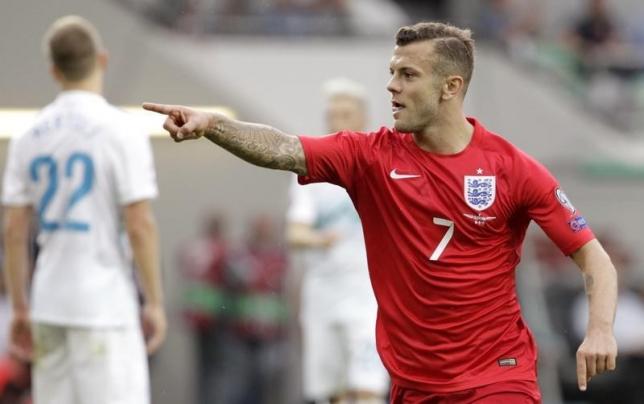 England's Jack Wilshere celebrates after scoring a goal. Photo: Reuters
LONDON: Arsenal manager Arsene Wenger has given Jack Wilshere his support after it was alleged the midfielder was involved in a late-night altercation at the weekend, saying the incident was "taken out of proportion". Media reports said the player was asked to leave a London nightclub at 2am on Sunday, with the Daily Mirror newspaper releasing footage showing him speaking to police. "I have spoken to him (Wilshere)," Wenger told reporters ahead of Saturday's London derby at sixth-placed West Ham United. "It looks to have been taken out of proportion a little bit. "There was no training session the next day. You can accept that sometimes the players go out when they are free the next day, it's not easy when you're well-known today to go out anywhere without creating some provocations." Wilshere, who has 28 England caps but has endured a stop-start career punctuated by a number of injury problems, has been out of action since suffering a leg fracture in the close season. The 24-year-old is getting back to fitness and is hoping to win a place in the England squad for the European Championship in France in June. Wenger said the midfielder would play for Arsenal's under-21s on Friday. Describing Wilshere as a "football brain", Wenger added that his injury history was the only thing standing in the way of his development. "He's very serious, very dedicated. The only thing that could stop him from having the career he can make is injuries," said the Frenchman. Wenger also refused to give up on the Premier League title even though his third-placed team trail leaders Leicester City by 11 points, albeit with a game in hand. "They (Leicester) have been remarkably consistent but every game is very tight and that can go the other way as well," Wenger said. He also announced the club were in talks with promising youngster Alex Iwobi about a new contract. "I think he (Iwobi) is a real Arsenal person because he has been here since the age of eight," said Wenger. "He has three years left (on his current deal) at the end of the season but of course we want to keep him here for longer."
#Arsenal #European championship #Jack Wilshere #Daily Mirror
You May Also like: