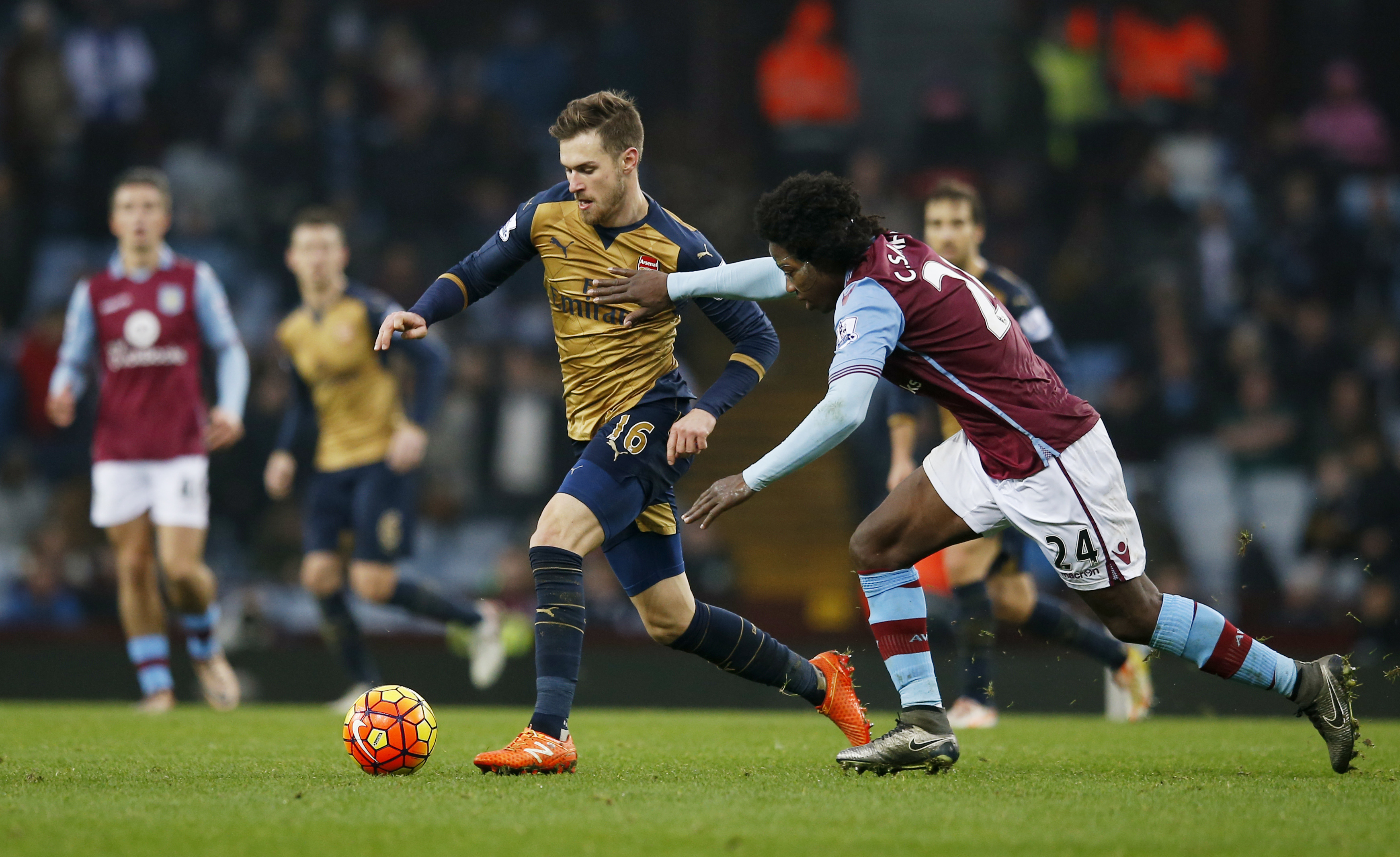 Arsenal's Aaron Ramsey in action with Aston Villa's Carlos Sanchez during Barclays Premier Game at Villa Park on Sunday, December 13, 2015. Photo: Reuters
LONDON: Arsenal midfielder Aaron Ramsey will be out for three weeks with a calf strain that has already sidelined him for Saturday's big game at Premier League leaders Chelsea, manager Arsene Wenger said on Friday. The Wales international picked up the injury in third-placed Arsenal's surprise 2-1 home defeat by Watford on Tuesday. "He is expected to be out for 21 days. We are a bit short at the moment but we have young players who can do well, the Frenchman told reporters. With Ramsey joining Santi Cazorla on the treatment table, Granit Xhaka suspended and Mohamed Elneny at the African Nations Cup, central midfield is becoming problematic for Wenger. "We are a bit short (in midfield) at the moment but I think we have young players who can do well in there," Wenger added. "We have Jeff Reine-Adelaide, we have of course Ainsley Maitland-Niles, we have Alex Oxlade-Chamberlain. Alex Iwobi can play in there." Striker Olivier Giroud, who picked up an ankle knock on Tuesday, should be available. The Gunners need victory at Stamford Bridge in Saturday's lunchtime kickoff to reel in Chelsea, who will take a 12-point lead if they win. With a host of high-profile fixtures are on the horizon for Arsenal, including a Champions League last-16 clash at Bayern Munich on Feb. 15 and a league trip to Liverpool on March 4, Wenger is keen for his side to gather momentum. "That's competition, when you accept that and want to be at the highest level you have to accept you have defining moments and games, if you don't want that then it's better you don't compete," Wenger said. "Everybody knows we have to recover, the team is united and there is a desire to put things right and everyone is focused on tomorrow's game. It's mainly mental to prepare tactically." Wenger said he had twice tried to sign Chelsea's N'Golo Kante, adding that it was "no coincidence" the midfielder is at the heart of everything good about Antonio Conte's side.
#Chelsea #English Premier League #Arsenal #Aaron Ramsey
You May Also like: