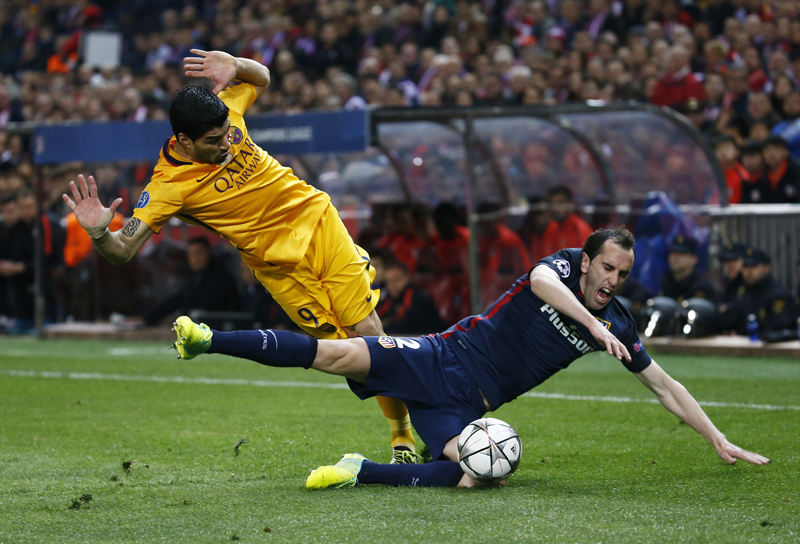 BARCELONA: Atletico Madrid will "lose leadership" while influential defender Diego Godin is absent from their next three games with a hamstring injury, coach Diego Simeone said on Friday.

Atletico's ambition to win the Champions League and La Liga title suffered a setback when the Uruguayan centre-back had a recurrence of the hamstring injury he sustained in March in the ninth minute of Atletico's 1-0 win at Athletic Bilbao, two weeks after returning to action.

Godin has been ruled out of Saturday's La Liga clash with Malaga and next week's league game with Rayo Vallecano, as well as Wednesday's Champions League semi-final first leg with Bayern Munich, and he faces a race against time to be fit for the second leg.

The good news for Atletico is that Godin's fellow Uruguay international Jose Gimenez has recovered from a hamstring injury sustained last month and is fit to face Malaga as Atletico look to keep the pressure on La Liga leaders Barcelona.

Atletico are level with Barcelona on 79 points but second due to their inferior head-to-head record.

"We lose leadership (with Godin's absence) because he is an important guy within the group, but we have players who can fill in for him and do a good job. We have Gimenez. We hope Godin recovers soon and as well as possible," Simeone told a news conference.

Atletico's rock-solid defence has been the cornerstone of their impressive domestic and European campaigns, keeping 21 clean sheets and conceding only 16 goals in 34 games in La Liga and letting in five goals in 10 games in the Champions League.

As well as Gimenez, Atletico have Montenegro international Stefan Savic to fill in for Godin, and 20-year-old Lucas Hernandez, who has developed a bigger role in the squad, making eight starts in the last two months.

"There's a group of important players in the dressing room who work for the club's needs," added Simeone on the defence.

The Argentine coach was not riled by Sergio Ramos's comments that Atletico "play the victims".

"What he has said is not my opinion, but I admire Ramos," Simeone said of the Real Madrid defender.

"I respect him and if I could choose players to join my team he'd be one of them."