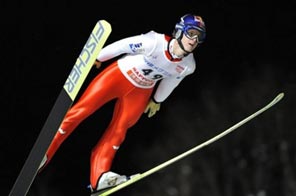 Thomas Morgenstern of Austria flies through the air during his first jump on the first day of the World Cup ski jumping Sapporo meet at Okurayama Hill in Sapporo. Source: AFP

SAPPORO: Austrian Thomas Morgenstern took advantage of a weakened field to claim victory in a World Cup ski jumping event here on Saturday.
Morgenstern, double Olympic champion in the 2006 Torino Games, scored 271.5 points from two jumps of 131.5 et 131 metres for his second World Cup win this season and his third in Sapporo, which hosts a second event on Sunday.

Switzerland's Simon Ammann finished a disappointing fifth (128 and 127.5m for 258.4pts) but took the lead in the World Cup overall standings, 43 points ahead of arch-rival Gregor Schlierenzauer after 13 of the season's 24 events.

Schlierenzauer opted to stay in Europe, as did Andreas Kofler, winner of the Four Hills tournament, and many of the best Finnish and Norwegian jumpers.