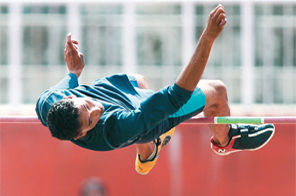 Bal Krishna Chaudhary of Nepal Armed Police Force Club in the high jump event during the National Open Selection Tournament at the Dasharath Stadium in Kathmandu on Wednesday. He sets a new national records in menâ€™s high jump. Source:

In men’s high jump, Bal Krishna bettered his own mark with a jump of 1.97m to claim the gold. He had set the previous best mark of 1.48m during the the fifth National Games in April. Surya Bahadur Khatri of Nepali Army and Dhirendra Chaudhary of Nepal Police won silver and bronze respectively.

Keshari also bettered her own record by jumping 1.50 metres on the second day of the tournament which also serves as a preliminary selection for the 11th South Asian Games. Her previous record was 1.40m set during the fifth National Games. She also won the long jump gold with a leap of 4.90 metres. Sita Hajam of People’s Liberation Army (PLA) and Barsha Bhattarai of Mid Western Region claimed silver and bronze medal respectively.

Pramila Rijal of APF, who set a new national record in the 400m and clinched 100m sprint gold on Tuesday, added another gold winning the women’s 200m race in 26.34.

Krishneswori Sintakala of Nepal APF won the women’s 5000m gold finishing in 19:19.08 ahead of Sujata Pradhan of Nepali Army and

Bidhyadhar Chaudhary of Nepal Police had a leap of

Khatri of Nepal Army and Yam Sajan Sunuwar took silver and bronze in the event.

#Bal Krishna #Keshari shatter national records
You May Also like: