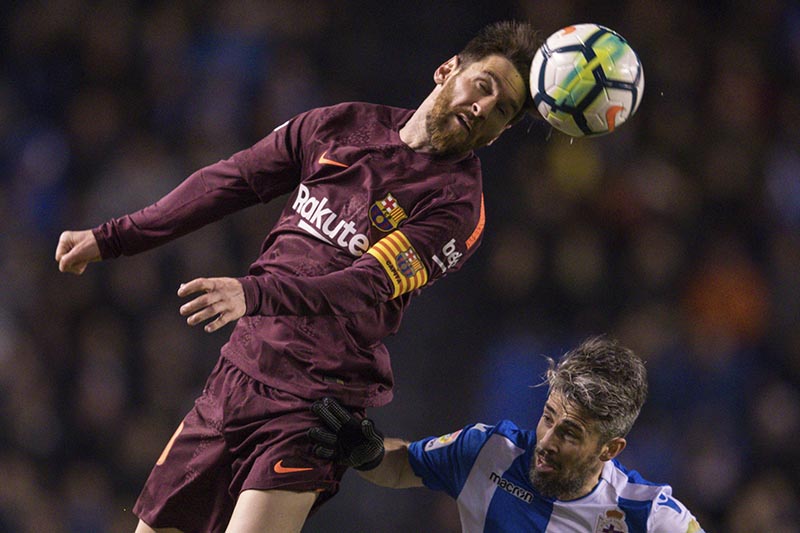 Barcelona's Lionel Messi, left, challenges for the ball with Deportivo's Luisinho during a Spanish La Liga soccer match between Deportivo and Barcelona at the Riazor stadium in A Coruna, Spain, on Sunday, April 29, 2018. Photo: AP
MADRID: Barcelona is celebrating yet another Spanish league title to cap a nearly perfect season. Unbeaten Barcelona added to its domestic dominance by winning La Liga for the third time in the last four seasons on Sunday, remaining unbeaten after 34 rounds. Lionel Messi scored a hat trick and Philippe Coutinho added a goal to give Barcelona a 4-2 win at Deportivo La Coruna and an insurmountable 11-point lead over Atletico Madrid. "We know how difficult it is to win this league," Messi said. "We were better than our rivals. There is a lot of merit to winning this title without any losses." Barcelona has won 26 league games and drawn eight, with four matches left. It was Barcelona's seventh league title in 10 seasons and 25th overall. Real Madrid, last year's champion, leads with 33 La Liga trophies. Barcelona has also thrived in the Copa del Rey, the country's second-most important club competition, winning it for the last four seasons. "The hardest thing is to keep winning," said coach Ernesto Valverde, who is celebrating his first league title in his debut season with Barcelona. "You have to find a way to keep coming back." Barcelona's next goal is to try to finish the league unbeaten, something which has never happened in the competition's current format. "It's been an almost perfect season for us in the league," midfielder Sergio Busquets said. Barcelona's biggest setback this season came in the Champions League, when it was eliminated by Roma in the quarterfinals after squandering a three-goal advantage from the first leg. Andres Iniesta, who last week announced he won't return for a 17th season with the club, started from the bench but entered the match close to the end to applause from most of the crowd at Riazor Stadium. Iniesta and Messi each have won nine Spanish league titles. Sunday's result relegated Clarence Seedorf's Deportivo. The hosts paid tribute to Barcelona even before the match started with its squad lining up outside the tunnel and applauding their rivals as they entered the field. Most of the opposing fans at Riazor also applauded Barcelona's players. Coutinho opened the scoring in the seventh minute with a well-placed shot into the top corner after a pass by Ousmane Dembele, and Messi added to the lead in the 38th with a strike from near the far post after a perfect cross by Luiz Suarez. Deportivo pulled one closer with a goal by Lucas Perez in the 40th and equalized with Emre Colak's shot from inside the area in the 64th. Messi put Barcelona ahead in the 82nd from close range after exchanging passes with Suarez inside the area, then sealed the victory in a breakaway in the 85th. Messi has 32 league goals, leaving him with eight more than Madrid's Cristiano Ronaldo in the race for top scorer. It has been yet another disappointing coaching stint for Seedorf, the former Dutch midfielder who earned only two victories in 13 matches since arriving to try to save Deportivo from relegation. The team has lost six times and drawn five under his command, returning to the second division for the first time since 2013-14. "We didn't reach our goal," Seedorf said. "Now the future is open. We'll see what happens." Seedorf had achieved lackluster results in his previous coaching stints, including at AC Milan in 2014. ATLETICO STAYS SECOND Atletico's depleted team defeated Alaves 1-0 to strengthen its grip on second place. Kevin Gameiro converted a second-half penalty kick to secure the away victory for Atletico, which rested most of its regular starters ahead of Thursday's return leg against Arsenal in the Europa League semifinals. The result gave Atletico a four-point gap to third-place Real Madrid, which has a game in hand. Gameiro scored the 78th-minute winner from the spot less than 10 minutes after Fernando Torres had his penalty kick saved by Alaves goalkeeper Axel Werner. Atletico forward Angel Correa was sent off with a second yellow card in second-half injury time. VALENCIA DRAWS Fourth-place Valencia still has to secure its Champions League spot after a 0-0 home draw against Eibar. Valencia, winless in four matches, has an 11-point lead over fifth-place Real Betis, which has four games left and hosts last-place Malaga on Monday. GETAFE MOVES UP Getafe moved to the final qualification spot for the Europa League with a 1-1 home draw against Girona. The result left Getafe in seventh place, one point in front of Sevilla. Girona, also in the fight for a spot in Europe's second-tier club competition, stayed ninth. It has 48 points, the same as Sevilla which has a game in hand.
#Barcelona #Lionel Messi #La Liga #Philippe Coutinho #Deportivo La Coruna
You May Also like: