BERLIN: After more than 40 years of Uli Hoeneß, Bayern Munich is going to have to get used to life without the man who helped turn it into one the world's biggest soccer clubs. 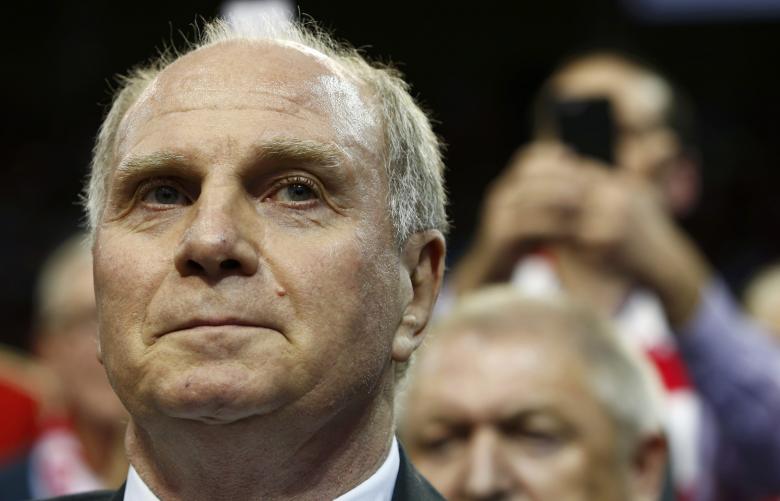 Bayern Munich's Uli Hoeness arrives during the annual general meeting of the German Bundesliga first division soccer club in Munich, Germany, November 25, 2016. REUTERS/Michaela Rehle
The 67-year-old Hoeneß was expected to formally inform the club's supervisory board on Thursday that he will not stand for re-election as president in November. Unprecedented criticism from club members at the AGM last November played a role in his decision to stand down. "It's hard to say how things will change," Bayern captain Manuel Neuer said. "I think, even if Uli Hoeneß isn't president or isn't there anymore, he won't be able to let go. He will always be associated with the club, always supporting, always helping." Hoeneß, a former forward who scored 86 goals in 239 Bundesliga appearances from 1970-79 for Bayern, took over as general manager in May 1979 when he was 27 after his playing career was ended by chronic knee problems. Bayern was nothing like the club it is now. It had 12 employees at the time, 12 million Deutschmarks (about $7 million) in revenue and was 8 million Deutschmarks ($4.6 million) in debt. Since then, Bayern has claimed 51 titles, including the Bundesliga (21 times), German Cup (12) and Champions League (2), while building financial reserves rarely seen in debt-ridden European soccer. Turnover rose to a club-record 657.4 million euros ($723.4 million) for the 2017-18 season. "He is the soul, the head and the heart of Bayern Munich. You can't replace him with another," Edmund Stoiber, the former minister-president of Bavaria, said at a local government reception for the Bayern team on Wednesday. Stoiber said Hoeneß and Bayern chairman Karl-Heinz Rummenigge had "disputes" over coach Niko Kovac when he was enduring a difficult spell at the club last season. Hoeneß backed the former midfielder, while Rummenigge criticized Kovac in public. Kovac's team finished the season by winning the league and cup double. Despite the boos and whistles at the club's AGM last year, Hoeneß remains immensely popular at Bayern. Fans chanted his name at the reception on Wednesday. Hoeneß's conviction and 42-month prison sentence in 2014 for tax evasion of 28.5 million euros ($39.6 million) did little to dent his popularity - he served half the term and was celebrated with standing ovations upon his return - but there had been more criticism of late due to club's sponsorship deals with Qatar, and his personal tirades against former and current players. Former Adidas chief executive Herbert Hainer, now chairman of the club's supervisory board, is slated to take over.
#Bayern Munich #German football #Uli Hoeness #German soccer
You May Also like: