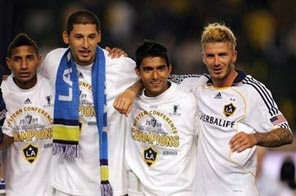 LOS ANGELES: Gregg Berhalter and Landon Donovan scored in extra time as the Los Angeles Galaxy secured their berth in Major League Soccer's title match with a 2-0 victory over Houston.
David Beckham's free kick set up Berhalter's goal in the 102nd minute.
Houston's Eddie Robinson tried to clear Omar Gonzalez's header off Beckham's free kick but Berhalter was able to slot the ball into the net from seven yards out.
Donovan added another goal in the 109th minute when he converted a penalty - setting an MLS record for career playoff scoring with 17 goals. The penalty was awarded after Dynamo's Ricardo Clark tripped Alan Gordon.
The Galaxy's triumph in the Western Conference title contest means they will play in their first MLS Cup final since 2005 on November 22 in Seattle against the winner of Saturday's Eastern Conference final between Chicago and Real Salt Lake.
Not only did they have to overcome Houston, they had to wait out two power outages that saw the lights go out and play halted at the Home Depot Center for a total of 36 minutes.
The Galaxy will make their sixth MLS Cup final appearance since the league began in 1996. The Galaxy won championships in 2002 and 2005.
Another trip to the championship match seemed unlikely early in the season for a club that equalled the league's worst record in 2008, and started 2009 with 11 draws in their first 13 matches.
England star Beckham was at the centre of a storm as he stayed on at Italian club AC Milan four months beyond his original loan period, provoking the ire not only of Galaxy fans but also of teammate Donovan - who questioned Beckham's commitment to the US league in a book.
Coach Bruce Arena, named this week the MLS Coach of the Year, helped reconcile his warring stars in plenty of time for a playoff push.
Dynamo's Brian Ching had the best chance to score in regular time, heading a ball from short range off Brian Mullan's cross.
But Galaxy goalkeeper Donovan Ricketts got his right hand to the ball to deflect it toward the crossbar.
Houston's Andrew Hainault appeared to score on a header off Brad Davis's ensuing corner kick in the 80th minute but Luis Angel Landin's foul before Hainault's shot meant the goal was disallowed.
The two stoppages when the lights went out - for 18 minutes in each half - disrupted the flow of the match but didn't faze the crowd of 25,373.
Players tried to stay loose and warm by running on the dim pitch or having treatment from trainers.
A statement released by the Home Depot Center said the outages were caused by "two significant power dips in the Southern California Edison industrial grid in which the facility sits" and caused the stadium lights to reset.

#Beckham's Galaxy book berth in MLS title match
You May Also like: