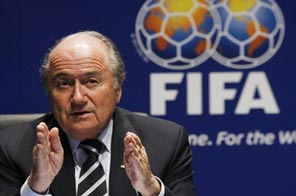 CAIRO: World football chief Sepp Blatter said Friday he regretted that many top clubs in Europe had not systematically freed their younger stars to compete in the Under-20 World Cup for their national teams.

A number of top clubs, notably from England, Germany or Italy, have used their right not to free their under-20 stars to compete in the event.

However, the FIFA president said he would look into making participation an "obligation" in the future.

"At the next possible opportunity I will again ask the Executive Committee (of FIFA) to make a ruling on this issue," Blatter said on the fringes of the competition final between Ghana and Brazil Friday.

"It should be an obligation to free players for this competition."

Blatter believes participating in the competition would add to the players' experience of playing at international level.

"The Under-20 World Cup isn't on the international calendar, meaning we have to ask clubs to use their goodwill and free their players for the tournament -- and certain clubs refuse because it is not an obligation.

"We would hope for clubs to allow their players the opportunity to compete at an international tournament, the standard of which is high.

"It would also add to the value of the players."

#Blatter wants U-20 World Cup participation compulsory
You May Also like: