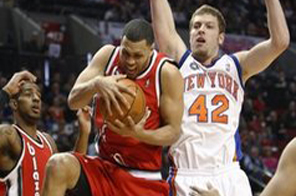 PORTLAND: LaMarcus Aldridge scored 21 points before sitting out the final quarter and the Portland Trail Blazers clinched a playoff spot with a 118-90 victory over the New York Knicks on Wednesday night.
The Blazers came into the game needing help to reach the postseason. San Antonio defeated Houston 119-102 and Dallas beat Memphis 106-102, meaning all Portland had to do was beat the Knicks to seal it.
Those games were finished when the Blazers went into halftime with a 65-38 lead over New York. They cruised the rest of the way, leading by as many as 36 points.
"This is what it's all about," Blazers coach Nate McMillan said. "This is what we play for."
Portland has won four straight and 12 of its last 14, including six straight home victories. The Blazers have gone 15-5 since the All-Star break and since their acquisition of former Knick Marcus Camby in a trade with the Los Angeles Clippers.
David Lee had 20 points and 10 rebounds for the Knicks, who have dropped the first three games on a five-game road trip.
Knicks forward Al Harrington tweaked his left ankle in the third quarter and did not return.
It was never close. Portland went ahead 50-30 in the first half after Martell Webster's dunk following a timeout. The Blazers led by as many as 28 in the first half, with veteran Juwan Howard coming off the bench to score 12 points.
Nicolas Batum hit a 3-pointer to put Portland up 80-44 before the midway point of the third quarter. Before he took a seat on the bench, Brandon Roy dunked to make it 92-63 late in the quarter.
All of Portland's starters sat in the fourth. Batum finished with 20 points, Roy had 16 and the Blazers won by their biggest margin this season.
The Knicks, who beat the Blazers 93-84 in December at Madison Square Garden, were denied their first season sweep since 1999-2000.
It was Portland's last game this season against an Eastern Conference foe. The Blazers went 17-13 against the East this season.
It is the second straight year the Blazers have made the playoffs after a five-season drought. Portland lost in six games to the Houston Rockets in the first round last year.
The Blazers have made the playoffs 28 times since joining the NBA in 1970.
The victory was all the sweeter for the Blazers because of all the injuries they've faced this season. Centers Greg Oden and Joel Przybilla both sustained knee injures that knocked them out for the season.
Twelve different Portland players have missed a combined 292 games this season, second in the league only to Golden State. Only Andre Miller and Martell Webster have played in all of Portland's games.
"Even with all the injuries, our goal was always to make the playoffs," Roy said.
NOTES: Former Blazer Chris Dudley, a Republican candidate for Governor in Oregon, was among those on hand as the Blazers held their final "Decade Night" of the season for the team's 40th anniversary. Some fans even held campaign signs during the game. ... Former Blazer Brian Grant was also honored, as was current Blazers broadcaster Antonio Harvey. ... Actor Timothy Hutton was among the fans at the game.

#Blazers beat Knicks 118-90 to clinch playoff berth
You May Also like: