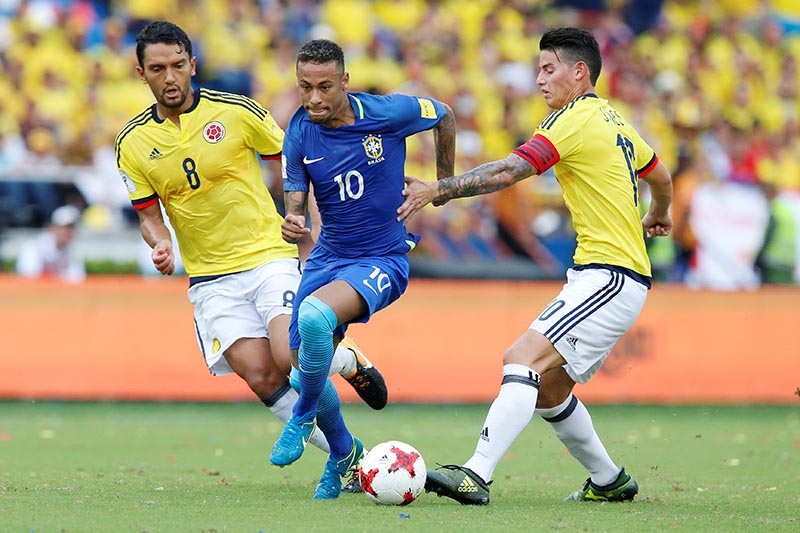 Neymar (10) of Brazil in action against Abel Aguilar (8) and James Rodriguez of Colombia in the 2018 World Cup Qualification match between Colombia and Brazil, at Metropolitano Roberto Melendez stadium, in Barranquilla, Colombia, on Septermber 5, 2017. Photo: Reuters
BARRANQUILLA: Colombia and Brazil shared a 1-1 draw in a hard-fought draw World Cup qualifier after Radamel Falcao's second-half header cancelled out Willian's stunning first-half volley on Tuesday. Colombia have still never beaten Brazil in a World Cup qualifying match but the draw marked the first time in 10 games that Brazilian coach Tite has come away from a qualifier with anything other than all three points. Brazil have already qualified for the finals in Russia next year and the result kept the Colombians in second place behind them with two matches remaining. Uruguay, who play Paraguay later on Tuesday, are in third, while Peru beat Ecuador 2-1 to move up into fourth and keep alive their hopes of a first World Cup Finals appearance since 1982. "Both the result and the performance were good and we deserve congratulations," Brazil's Willian told reporters after the match in the searing heat of the tropical port city. "We created chances but it is difficult to play here, the pitch was dry and the ball bounced a lot. "My goal was nice," he added. "I caught it just right." The Chelsea winger gave Brazil the lead in first half stoppage time when he pounced on a Neymar knock down to volley spectacularly into the top corner from 20 yards out. Colombia levelled the score 11 minutes into the second half when Falcao rose to meet a cross from the right and glanced a powerful header down and into the net. James Rodriguez hit the post for Colombia with a free kick four minutes later and Brazil pushed forward with some nice short passing but neither side could get the winner. Brazil, the only team to win the World Cup five times, top the 10-team group and are the only South America side to have so far qualified for Russia 2018. The top four teams qualify automatically for the tournament with the fifth-place side going into a playoff against New Zealand. In the evening's other early game, second-bottom Bolivia got just their fourth win in 16 qualifiers when they deservedly beat Chile 1-0 thanks to a second half penalty from Juan Carlos Arce. The Bolivians, who sit second-bottom with no chance of going to Russia, were on top for most of the game played at altitude in La Paz. Their win complicates life for the Copa America champions, who started the day in fourth place but now seem likely to lose ground. The Chileans play Ecuador at home and Brazil away in their final two qualifiers next month.
#Brazil #Neymar #World Cup qualifiers #Colombia #Radamel Falcao
You May Also like: