‘Bullying Mourinho should be jailed’ 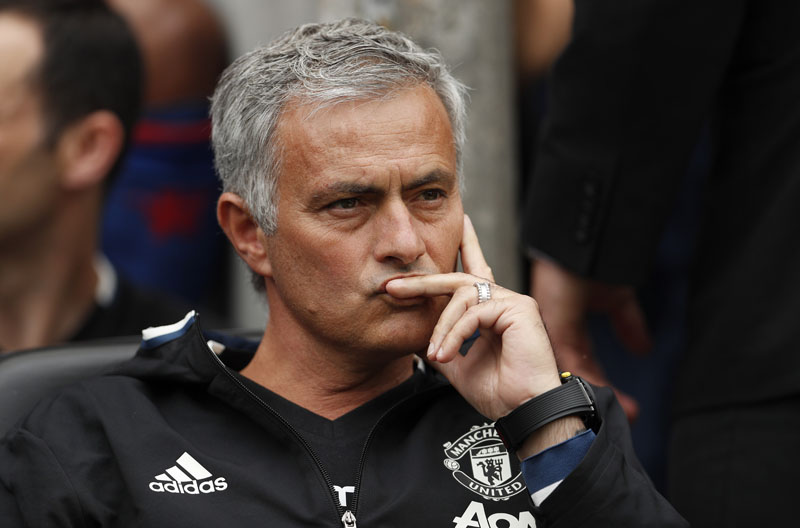 Manchester United manager Jose Mourinho watches on as his side play against Wigan Athletic in the pre-season friendly at the DW Stadium on July 17, 2016. Photo: Reuters/File

Jose Mourinho should be sent to prison for bullying and exiling Manchester United midfielder Bastian Schweinsteiger, a member of world players’ union FifPro claimed on Thursday.

Mourinho is keen to sell Schweinsteiger as he puts his mark on United’s squad and reports have emerged that the Old Trafford manager has banished the Germany star to train alone and with the reserves.

The World Cup winner was absent from United’s squad for Wayne Rooney’s testimonial against Everton on Wednesday, even though Mourinho used 22 players in the goalless draw.

Manchester United manager Jose Mourinho watches on as his side play against Wigan Athletic in the pre-season friendly at the DW Stadium on July 17, 2016. Photo: Reuters/File

In Slovenia, we would have indicted Mourinho and asked for the highest penalty — three years in prison. This is clearly meant to discourage Bastian. Mourinho is setting a bad example.

I would take it to the ordinary court. In our case, the penal code is quite clear. If there is bullying and harassment, there’s a prison sanction, a maximum of three years in prison.”

Stefanovic added: “Schweinsteiger should turn to the Professional Footballers’ Association and he should file a complaint and I would also seek penalty for Mourinho.

Despite his travails in Manchester, Schweinsteiger remains a revered figure at his former club Bayern Munich and with the German national team after making 120 appearances for his country.

Bayern president Karl-Heinz Rummenigge says United’s reputation has been tarnished by Mourinho’s approach. “I could hardly believe it. One or two players are going to think long and hard in future about whether they want to go to such a club,” he said.

Ironically, Schweinsteiger forced his way back into Bayern’s plans in 2005 after being told by then-coach Felix Magath to train with the reserves.

He bounced back to inspire Bayern to a league and cup double, contributing to his haul of eight Bundesliga titles, seven German Cups and the 2013 Champions League title with the club.

He was also a key part of Germany’s 2014 World Cup triumph and won last season’s FA Cup with United.