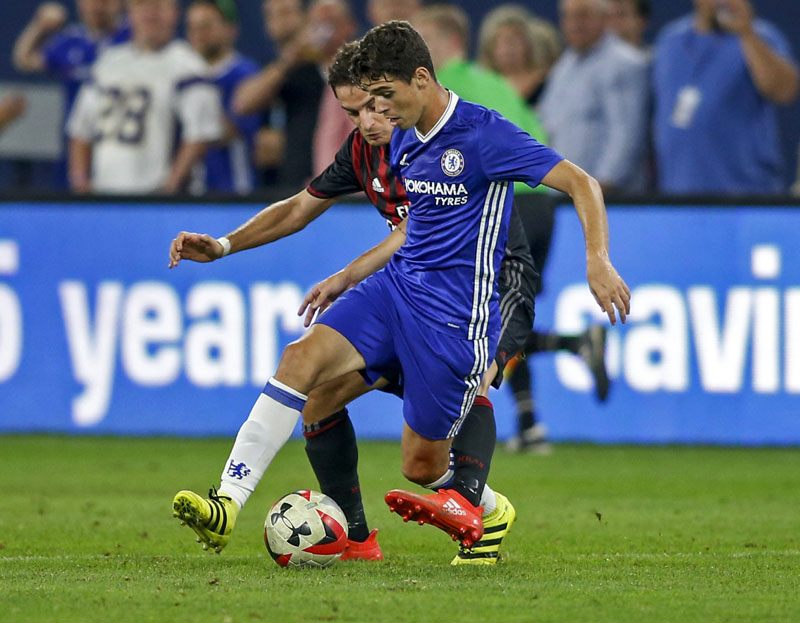 Chelsea midfielder Oscar (front) dribbles away from AC Milan midfielder Giacomo Bonaventura during the second half of a friendly soccer match on Wednesday, August 3, 2016, in Minneapolis. Chelsea won 3-1. Photo: AP

Although no financial details of the transfer were released, media reports suggested Shanghai paid 60 million euros ($62.63 million) to lure Oscar to the 16-team league.

"Chelsea Football Club and Shanghai SIPG have agreed terms for the permanent transfer of Oscar," Chelsea said in a statement.

The 25-year-old Oscar, who scored 38 goals in 203 appearances for Chelsea, lifted the Premier League, League Cup and Europa League during his four-and-a-half-year spell at the club.

Oscar, who will link up with former Chelsea manager Andre Villas-Boas at Shanghai, struggled to nail down a starting spot under manager Antonio Conte this season, making four of his nine league appearance from the bench.

With compatriots Hulk and Elkeson plying their trade at Shanghai, Oscar becomes the latest Brazilian to join the Chinese Super League team and is reportedly set to become the highest paid player, earning about 400,000 pounds a week ($490,760).

However, Oscar could soon be eclipsed by Carlos Tevez when the Argentine puts pen to paper on a huge contract with Shanghai Shenhua, with the striker reportedly set to earn 615,000 pounds a week.

Shanghai SIPG finished third in the 2016 Chinese Super League season, which ran from March to the end of October, 12 points behind champions Guangzhou Evergrande and five behind second-placed Jiangsu Suning.