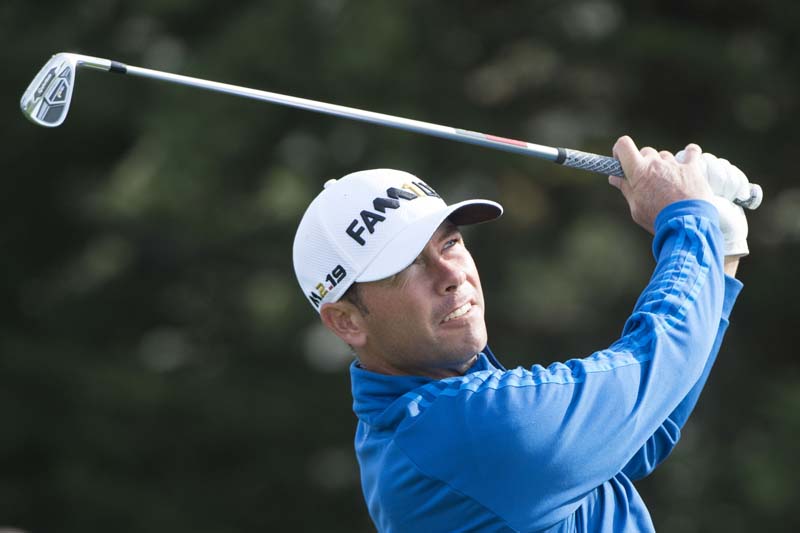 Chez Reavie hits his tee shot on the 17th hole during the second round of the AT&T Pebble Beach National Pro-Am at Pebble Beach Golf Links, California, on February 12, 2016. Photo: USA Today via Reuters
Los Angeles, February 12 American Chez Reavie rebounded superbly from missed cuts in his last two PGA Tour starts to fire an eight-under 63 and grab a one-shot lead in the opening round of the Pebble Beach National Pro-Am on Thursday. While some of the biggest names in the game battled hard to post sub-par scores, Reavie covered his final nine holes in a sizzling seven-under 30 at Monterey Peninsula Country Club, the easiest of the three venues being used for this week’s event. That left Reavie, whose only PGA Tour victory came at the 2008 Canadian Open, one stroke in front of Australian Cameron Smith and American Bronson Burgoon, who also played at Monterey Peninsula, after a picture postcard day of unbroken sunshine. Swede Freddie Jacobson had the best score at the Pebble Beach host course, a seven-under 65, while Englishman Justin Rose and American JB Holmes were best at Spyglass Hill, with six-under 66. World No 1 Jordan Spieth, back on the PGA Tour after playing tournaments in Abu Dhabi and Singapore, struggled with his short game as he mixed four birdies with three bogeys for an opening 71 on the challenging Spyglass Hill layout. “I played the hardest holes on this golf course in four under par and then I played all the easy ones over par,” said Spieth “It’s kind of a bit odd.” Australian world No 3 Jason Day also had to fight hard as he matched Spieth with a 71 at Spyglass Hill. “It’s a little frustrating,” said Day, who birdied two of his last six holes to finish the round with something of a flourish.
#PGA Tour #Chez Reavie #Pebble Beach National Pro-Am #Monterey Peninsula Country Club #Cameron Smith #Bronson Burgoon
You May Also like: