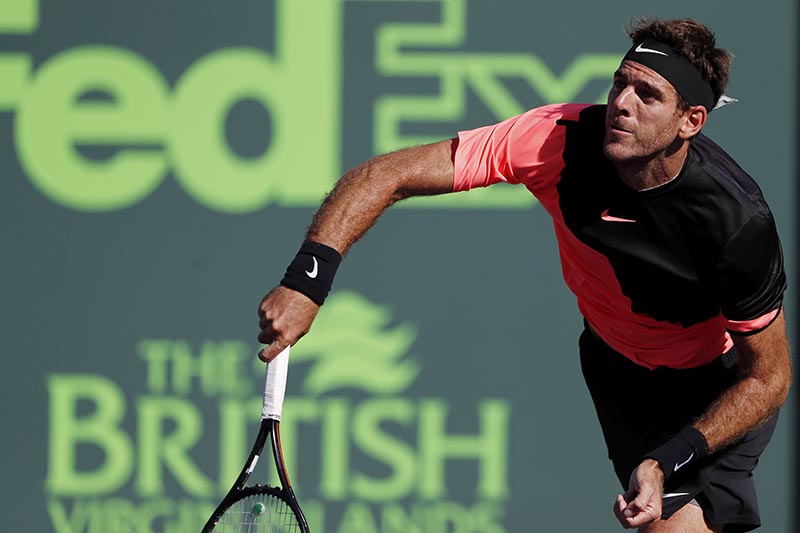 Juan Martin del Potro of Argentina serves against Kei Nishikori of Japan (not pictured) on day six of the Miami Open at Tennis Center at Crandon Par, in Key Biscayne, Florida, USA, on March 25, 2018. Photo: Geoff Burke-USA TODAY Sports via Reuters
Croatian second seed Marin Cilic survived a tough examination by Canadian Vasek Pospisil to reach the fourth round of the Miami Open with a 7-5 7-6(4) victory after nearly two hours on Sunday. But the tournament, with world number one Roger Federer already ousted, lost another highly ranked player when Bulgarian Grigor Dimitrov, the third seed, was taken down 6-4 6-4 by Frenchman Jeremy Chardy. Indian Wells champion Juan Martin del Potro of Argentina, the fifth seed, was more fortunate, winning his 13th consecutive match by defeating Japan's Kei Nishikori 6-2 6-2. The big-hitting Cilic fired six aces and saved all three break points he faced against Pospisil, but the 77th-ranked Canadian made it more difficult than the Croat probably expected. Trailing 5-6 0-40 in the second set, the Canadian saved three consecutive match points and hit a running forehand pass to cap a 33-shot rally before Cilic claimed victory in the tiebreak. "It was a relief at the end," Cilic told reporters. "I had those three match points at 6-5 and there was that great rally at deuce. I was playing really well in the tie-break, returning really well and serving really good. "I saved the best for last and I'm really pleased with the victory." Del Potro fired 17 winners, claiming all five points when crashing the net and turned back Nishikori's lone break chance to take the match in 72 minutes. "I think I'm playing good," del Potro told reporters. "I can play even better, but I need to get confidence playing on this court, trying to keep winning matches. But it is not easy. My body is starting to feel tight because of all my success." The fifth seeded Argentine will face Filip Krajinovic in the fourth round on Tuesday after the Serbian defeated Frenchman Benoit Paire 6-3 6-3. Meanwhile South Korean Chung Hyeon, the 19th seed, needed just 62 minutes to dispatch American qualifier Michael Mmoh 6-1 6-1. The highest-ranked player from Asia at number 23, Chung has not dropped a set so far in the tournament. He will take on Joao Sousa in the last 16 after the Portuguese outlasted American Jared Donaldson 1-6 6-3 6-4.
#Kei Nishikori #Marin Cilic #Vasek Pospisil #Miami Open #Key Biscayne #Juan Martin del Porto
You May Also like: