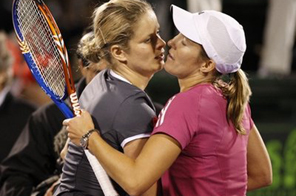 Kim Clijsters, left, of Belgium, is congratulated by Justine Henin, of Belgium, after defeating her 6-2, 6-7 (3), 7-6 (6), in their semifinal match at the Sony Ericsson Open tennis tournament in Key Biscayne, Fla., Thursday, April 1, 2010. Source: AP

KEY BISCAYNE: Venus Williams added a new dance step to her celebration routine Thursday, mimicking the player she had just beaten by hopping foot to foot at the net.

With that, Williams sashayed into the final at the Sony Ericsson Open. She won her 15th consecutive match Thursday by beating Marion Bartoli 6-3, 6-4.

"I'm very pleased to be in the final, but it's not enough," said Williams, seeded third. "I want to take the title."

So does Clijsters, the 2005 champion, who needed four match points to finish off Henin in their seesaw semifinal. Much of the match was sloppy, with 18 double-faults and 103 unforced errors, but there were a series of exciting exchanges at the end.

Clijsters hit five winners in the final tiebreaker, and she took the last two points with a stab volley and a forehand that kissed the sideline.

"It's a win. It's fun," she said. "But there's no celebration whatsoever. The tournament's not over."

Clijsters also beat Henin in a third-set tiebreaker by the same 8-6 score in January in Brisbane. That event marked Henin's return to the tour following a 20-month retirement.

"It's difficult to lose this way," she said. "I hope it's not going to be like this all the time."

On the men's side, No. 16-seeded Tomas Berdych and No. 5 Robin Soderling won quarterfinal matches and will meet Friday night.

No. 6 Andy Roddick faces No. 4 Rafael Nadal in the other semifinal.

Williams is riding her longest winning streak since 2004, and she's a finalist for the first time in nine years at the tournament she considers her hometown event. She won the title in 1998, 1999 and 2001.

With five-time champion Serena Williams watching from the photo pit, Venus took charge at the start against Bartoli, needing only 11 strokes to win the first eight points. A shaky Bartoli double-faulted four times to lose the sixth game, and said her legs felt tight because Williams' power put so much pressure on her.

"I was feeling like I had glue on my sneakers," Bartoli said. "I couldn't jump, honestly. That's why my serve was going into the net."

To loosen up, she resorted to the between-point exercises, as though in a Jazzercise class. Williams said she didn't find the high-stepping a distraction, and coyly denied impersonating the moves.

"She's always doing that when she's happy," Bartoli said, "so I guess she was happy."

For the No. 13-seeded Bartoli, hopping helped. Her play steadied as the match progressed, and she began finding the corners with her two-handed forehand.

Her finish was forceful. Williams hit eight winners to sweep the final three games and served out the match at love, helped by a pair of aces.

"I like to think of myself as big-point player," she said. "When the stakes get a little higher, it feels good to be able to pull a little extra something out."

Williams is 6-5 against Clijsters, who seeks her third title since returning from retirement last August.

Now 19-1 this year, Venus is bidding for her third consecutive title after winning at Dubai and Acapulco in February. She's dominating while Serena has been sidelined with a left knee injury since winning the Australian Open two months ago.

The knee must be better, judging from the shoes she wore while watching the semifinal from the front row.

"She looked really amazing," Bartoli said. "I said to her, 'It's not fair you're dressing up so nicely. I'm going to watch more what you're wearing than the ball.' ... She had a red dress and some really, really, really high-heel shoes, maybe something like 14 inches.

"I think she can manage to walk pretty well. I think from wearing those kind of shoes, you don't feel that much pain in your knees."

For now, however, Serena will leave the dancing to Venus.

#Clijsters edges Henin in semis; Venus wins
You May Also like: