Dempsey hat trick lifts US over Honduras 6-0 to rebound 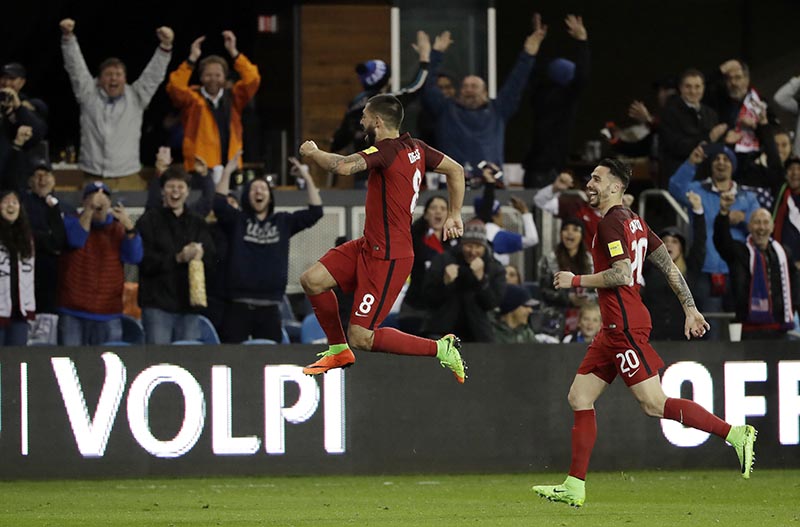 United States' Clint Dempsey (centre) celebrates his free-kick goal with teammate Geoff Cameron (right) during the second half of a World Cup qualifying soccer match against Honduras, in San Jose, California, on Friday, March 24, 2017. Photo: AP
SAN JOSE: Just before they walked onto the field for a critical World Cup qualifier, American players received a message from Bruce Arena. "I have this copyrighted, but it was something to the effect of: first shot, first tackle, first goal," the returning coach said. "I have T-shirt rights to that." Their response was emphatic, elders and youth alike. Clint Dempsey came back from an irregular heartbeat at age 34 to score his second international hat trick, 18-year-old phenom Christian Pulisic had one goal and set up three others, and the US routed Honduras 6-0 Friday night to get back in contention for an eighth straight World Cup berth. "Three massive points," captain Michael Bradley said. "No two ways about that." Surprise starter Sebastian Lletget got his first international goal in the fifth minute after Pulisic's shot deflected off the goalkeeper, Michael Bradley doubled the lead in the 27th and Dempsey scored off Pulisic's perfectly weighted chip in the 32nd. Finding room to maneuver in a central midfield role, Pulisic made it 4-0 just 12 seconds into the second half with his fourth international goal. Dempsey rounded the keeper to score following a feed from Pulisic in the 49th, and Dempsey got another on a 23-yard free kick in the 54th. With 55 international goals, Dempsey moved within two of Landon Donovan's American record. "I'm a fighter," Dempsey said, "look for the opportunity to get out there and show that I should be around still." In its first competitive match since Arena replaced Jurgen Klinsmann, the US moved from last to fourth in the final round of the North and Central American and Caribbean region, tied at three points with Honduras and with Trinidad and Tobago but ahead on goal difference, Mexico leads with seven points, followed by Costa Rica with six and Panama with four. The top three nations qualify for next year's tournament in Russia, and the fourth-place nation advances to a playoff. With a victory at Panama on Tuesday, the Americans could move into the top three. "If we get a result in Panama, things change fast," midfielder Alejandro Bedoya said. The US had never before won a hexagonal game by more than three goals. "This team is really strong mentally," Pulisic said. "It shows good heart." The American Outlaws and the rest of the lively crowd of 17,729 loved every second of this long-awaited showing. Gloom had descended upon the Americans in November when they opened the hexagonal with a 2-1 home loss to Mexico and a 4-0 wipeout at Costa Rica. The defeats caused the US Soccer Federation to fire Klinsmann, who had coached the Americans since 2011, and bring back Arena, who led the team from 1998-2006. Dempsey was sidelined from August until this month by an irregular heartbeat and started only because of injuries to Bobby Wood and Jordan Morris. "We didn't have anyone else," Arena said. "It made it easy for me." Tim Howard, the Americans' 38-year-old goalkeeper, got his 38th shutout. He returned only two weeks ago from a leg injury sustained in the November loss to Mexico. Geoff Cameron, back from a knee strain that had sidelined him for fourth months, was shifted to right back from central defense because of injuries to others, and Jorge Villafana was inserted on the left. But there were yet more injuries. Lletget hurt his left ankle on Ever Alvarado's tackle, was replaced in the 18th minute and left the stadium on crutches. Defender John Brooks was stretchered off the field, hand over his face, in the 69th due to dehydration. Arena admitted he decided weeks ago to play Pulisic in central midfield. With Fabian Johnson hurt, Arena started wide midfielders largely overlooked by Klinsmann: Lletget and Darlington Nagbe. Wearing red from head to toe, the US went ahead when Jozy Altidore poked the ball ahead to Pulisic. His left-footed shot that went off goalkeeper Donis Escobar, and Lletget tapped in the ball with his right foot from 2 yards. Bradley, given his debut by Arena in 2006, doubled the lead when he took a pass from Bedoya, cut to his left, took four touches and cut the ball back to beat Escobar with one-hopper from about 25 yards. Showing poise beyond his years, Pulisic created the third goal when he lofted a pass to Dempsey, who allowed the ball of bounce off his right shoulder. Dempsey held off Henry Figueroa and, while falling, scored with his right foot from 8 yards. "It looked pretty," Howard said. "Hopefully, we can keep that up." Notes: Mexico defeated visiting Costa Rica 2-0 on goals by Javier Hernandez in the seventh minute and Nestor Araujo in the 45th. . ... Trinidad won 1-0 at home against Panama on Kevin Molino's 37th-minute goal.
#US #World Cup #World Cup qualifier #Honduras #US vs Honduras
You May Also like: