Out of the 20 nominees, half were from cricket and football with six coming from the former. The NSJF has already announced five nominees in People’s Choice category with one player each from cricket, football, volleyball, badminton and bodybuilding.

Cricket became the lone sport that made it to all five categories. 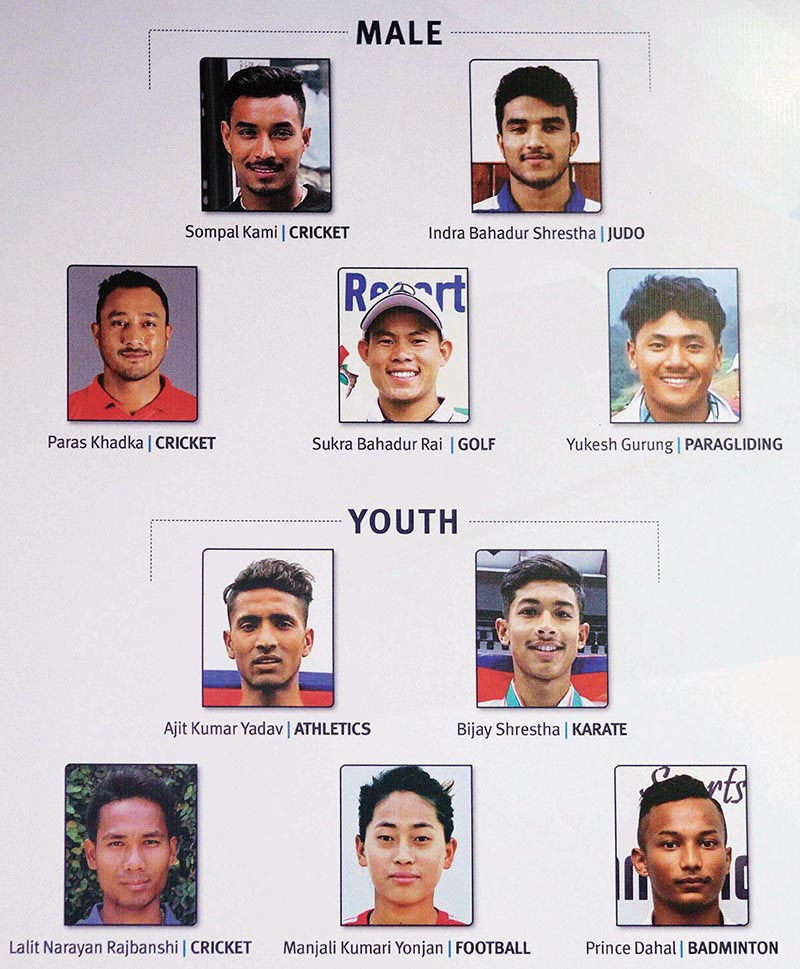 Cricketers Paras Khadka and Sompal Kami earned the nominations for their outstanding performance in the maiden One Day International and T20 International series win over the UAE. While skipper Khadka led from the front and also scored Nepal’s maiden ODI century, while Kami became the first Nepali cricketer to take a five-wicket haul in ODIs.

Gurung was the member of the paragliding team that won historic silver medal in the Asian Games, while judoka Shrestha bagged gold medals in the South Asian Judo Championship on home soil and University Judo Championship in Thailand.

Bhandari was the best player and highest scorer in Women’s League.

Spiker Chaudhary became the best player in nine of the 10 tournaments won by Nepal APF Club in their 11 appearances, while cricketer Rana Magar was the highest scorer among Nepali players and fourth overall in Women’s T20 Smash in Thailand.

Dahal is another strong contender in youth category.

The left-handed spinner also took two wickets in the third and final match of the T20I series against the UAE, while he pocketed six wickets in the PM Cup One Day Cricket Tournament.

Likewise, Tamatta was the coach of the national cricket team that won maiden ODI and T20I series against the UAE and drew 1-1 against Netherlands in the first-ever T20I series. He also led the national team to victory in the ICC T20 World Cup Asian Regional Qualifiers ‘B’. APF volleyball coach Bista guided the team to 10 titles in 11 tournaments and won best coach award in eight events.

The 16th edition of the Pulsar Sports Award, organised by NSJF in association with Action Sports and powered by Gold Star, features 10 categories and the winners of male, female, coach and people’s choice will receive Pulsar NS160 motorcycle each.

The youth, para-athlete, special, lifetime achievement, team of the year and Asian journalist winners will get Rs 50,000 apiece. The winners and nominees will get Dish Home Set Top Box and gift hampers from Kelme Nepal, while the men and women sections winners will get open-destination two-way tickets from Turkish Airlines. The Award is slated for July 2 at Nepal Academy.