Ronaldo double and Bale strike give Real win over Getafe 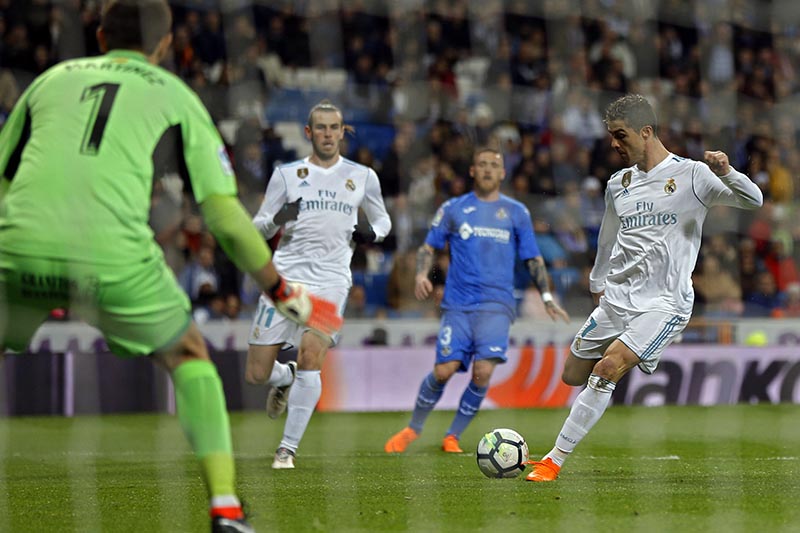 MADRID: La Liga champions Real Madrid beat Getafe 3-1 on Saturday with a goal from Gareth Bale and two strikes from Cristiano Ronaldo to go 12 points behind leaders Barcelona and warm up for next week's Champions League game at Paris St Germain.

Bale lashed in the opener in the 24th minute from inside the area at a sparsely attended Santiago Bernabeu, while Ronaldo stretched Zinedine Zidane's side's advantage in injury time of the first half after a through ball from Karim Benzema, scoring his 300th Liga goal.

The Portuguese moved on to 16 league goals for the season by heading in a cross from Marcelo in the 78th minute to restore Real's two-goal cushion after Francisco Portillo had pulled back a goal from the penalty spot for Getafe.

Former Chelsea forward Loic Remy was sent off for Getafe two minutes into the second half for a second yellow card after striking Real defender Nacho Fernandez in the face.

Bale overtook David Beckham as the British player with the most appearances in La Liga by playing his 117th game for Real but missed a clear chance in injury time after being played in by a stunning pass by Marco Asensio.

Real are third in the Liga standings on 54 points after 27 games. Barcelona, who have 66, host second-placed Atletico Madrid in a top-of-the-table clash on Sunday, when Diego Simeone's side can reduce the gap behind the leaders to two points with a victory.

After Real's five-game winning streak in all competitions was snapped by a surprise defeat at Espanyol on Tuesday, the coach said it was vital his side returned to winning ways ahead of their trip to Paris for the second leg of their last-16 tie.

"We had the PSG game in our heads and perhaps that's why we eased up a bit in the second half and had a few difficulties but once they went down to 10 men it was easier for us," Zidane told reporters.

Sevilla secured a second straight victory by seeing off Athletic Bilbao 2-0 at home to tighten their hold on fifth place, moving four points ahead of Villarreal, who were beaten 2-0 at home by Girona.

Top flight debutants Girona moved up to seventh in the standings and in to the Europa League qualification spots as well as becoming the first team in their maiden season in La Liga to reach 40 points after 27 games.

Basement side Malaga suffered a sixth consecutive defeat by losing 2-0 at Leganes while Deportivo La Coruna scored their first goal in their fifth game under coach Clarence Seedorf but could only draw 1-1 at home to Eibar and remain 19th.