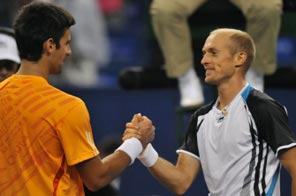 SHANGHAI: Nikolay Davydenko ended a three-hour confrontation in dramatic fashion Saturday as he breezed through a third-set tiebreaker to sweep into the final of the Shanghai Masters.

The Russian overcame second seed Novak Djokovic 4-6, 6-4, 7-6 (7/1), solidifying his position in the chase to the year-end ATP World Tour Finals in London from November 22.

The match was a replay of last year's final here at the Tennis Masters Cup, which Djokovic won.

"I played a great match but he was too good. But I've had a great two weeks in China," the Serbian said.

Davydenko will face Sunday in the final the winner from the Spanish pair of Rafael Nadal and Feliciano Lopez.

It is slowly turning out to be a good end to the season for Davydenko, who missed three months of play with foot and ankle injuries but has managed to win three titles since.

He stands 2-5 against Nadal and 1-5 against Lopez.

#Davydenko reach final of Shanghai Masters
You May Also like: