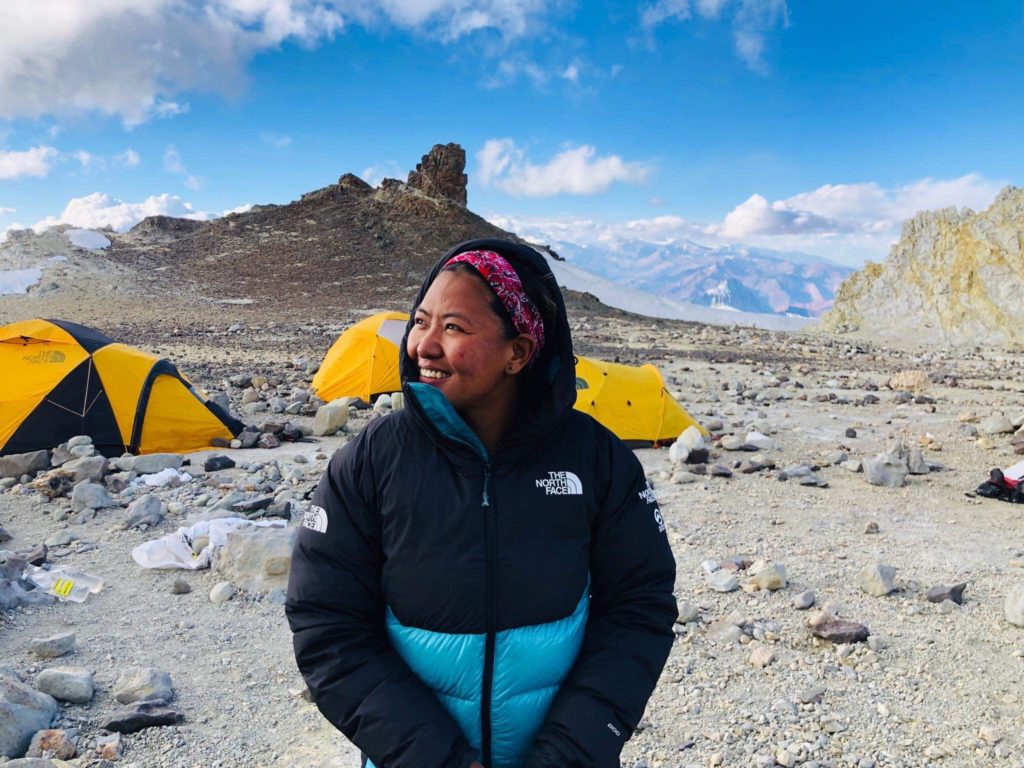 KATHMANDU: A 27-year-old woman from Dolakha’s Rolwaling Valley has been selected as a global athlete by American outdoor apparel and sports gear crafter, The North Face. Dawa Yangzum Sherpa, the country’s first female international mountain guide, reached professional athlete agreement with The North Face, a division of VF Outdoor, last week entering the rare echelon of the global athletes in the biggest brand name. “I am humbled and extremely happy to be part of The North Face Athlete family and grateful for all their support as I continue my passion of climbing,” Sherpa told THT. With this agreement, she has also become of the very few professional mountaineers from Nepal to be paid as an athlete by a major western company. Per the agreement, Dawa Yangzum will be paid about Rs 140,000 per month, or Rs 16 lakhs and 80 thousand per year in the form of direct cash compensation, travel and lodging expenses, and gear including clothing and equipment. She will also be provided with most of the necessary gears by The North Face for specific purposes such as climbing above 8,000 meters, the agreement reads. “The North Face will also pay Dawa a daily rate of Rs 39,000 for additional Athlete days to promote The North Face brand, and a daily rate of Rs 17,000 for additional travel days.” “Initially, I never believed that a Sherpa girl from Nepal would be accepted into the upper echelon of athlete program in the US, especially in The North Face Team,” she said. Dawa Yangzum, who loves climbing, and providing mentorship to young, especially girls, to pursue their passion of climbing,  said, she has a belief that even as a woman from Nepal, anything is possible. Prior to The North Face, Dawa Yangzum was an athlete for Sherpa Adventure Gear for seven years.  Sherpa is the first IFMGA Certified Female Guide in South Asia and the only one of the two female guides with IFMGA certification in the whole of Asia. An excellent skier, with experiences in the Rocky Mountains of Colorado, and the Alps of France, she also works as a professional guide in Nepal, the US and South America. Looking back to many years at the Khumbu Climbing Center, Dawa is particularly thankful to Conrad Anker, Jennifer Lowe and Peter Athens for their support and early guidance.  “I also credit excellent mentorship from other Sherpas living in the US, including Norbu Tenzing Sherpa, Director of AHF living in San Francisco and Karsang Sherpa, Executive Vice President at Tralee Capital Partners, in Denver Colorado, for my success,” she added. Her successful climbs include K2, Everest and the first ascent of two mountains in Nepal. She was featured as one of the ‘Women Alpinists’ in the 52nd Issue.  She has also been featured in The National Geographic, Rock and Ice, Outside and various publications in Europe and Asia.

#The North Face #Dawa Yangzum #Dawa Sherpa
You May Also like: