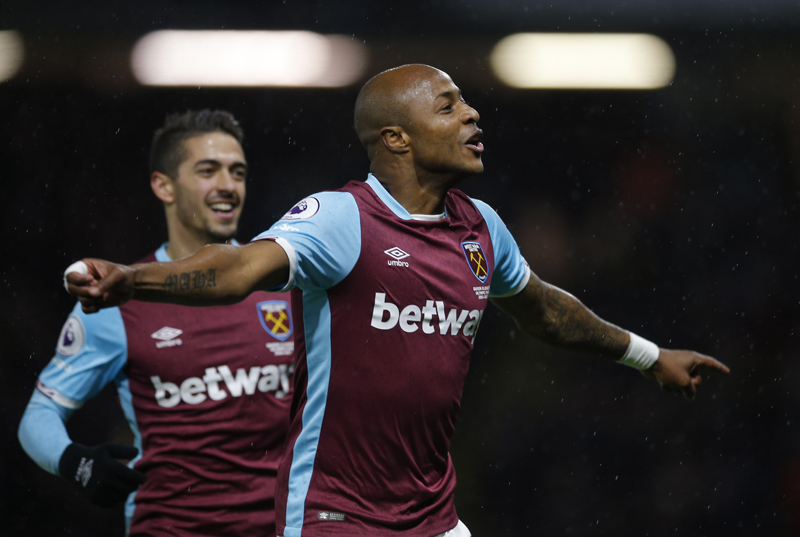 West Ham United's Andre Ayew celebrates scoring their first goal. Photo: Reuters
LONDON: Troy Deeney continued his recent prolific goalscoring form but his early penalty was not enough for Watford to beat a resilient West Ham as substitute Andre Ayew earned the visitors a point in a hard-fought 1-1 draw on Saturday. The game was marred by a knee injury to Watford's Mauro Zarate, who had earned the third-minute spot kick that Deeney converted by drawing the foul from Cheikhou Kouyate in the box. The Vicarage Road crowd went quiet when the Argentine striker, who went down after a sharp turn just before halftime, needed oxygen on the pitch before being carried off on a stretcher after lengthy treatment and taken to hospital for a scan. After Deeney's goal, his fourth in five league outings, West Ham hit back strongly and deserved to level when Michail Antonio's left-foot shot, extraordinarily, hit both posts before Ayew, who had been on the pitch just eight minutes, side-footed the rebound into an empty net. Antonio received a second yellow card for a deliberate handball in the 86th minute but the ninth-placed Hammers survived a late onslaught, in which Deeney came close to notching a winning header, to retain their two-point lead over Watford.
#West Ham United #English Premier League #Watford #England #Andre Ayew #Troy Deeney #Cheikhou Kouyate
You May Also like: