DCA all set to host Ruslan DPL in Dhangadhi 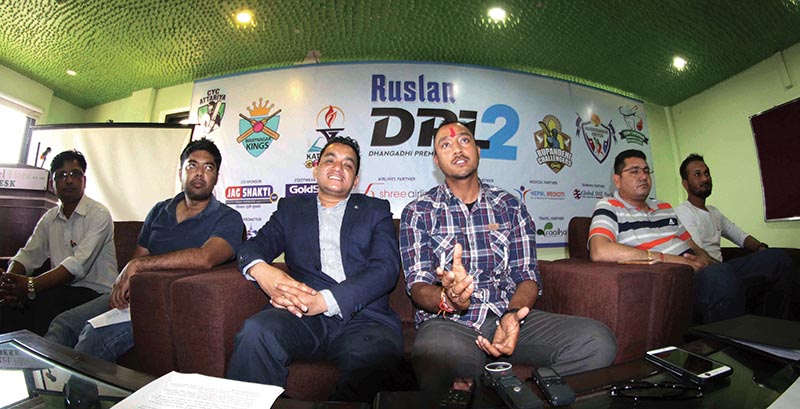 Dhangadhi Cricket Academy said it was all set to host the second edition of the Ruslan Dhangadhi Premier League from Saturday.

“All the preparation works have been completed except for the finishing touch of the grounds,” said DCA President Subash Bahadur Shahi at a press meet today. “We are ready to host tournament and are committed to make it a grand success with the help of all quarters of the society,” said Shahi.

“From this edition, all the participating teams will have two foreign players and we hope the inclusion of abroad cricketers would help us in taking the tournament to a new height,” said Shahi. “We have reached at this stage with the hard work of eight years and we will keep on putting in our efforts to take it to the next level in another eight years. The International Cricket Council has given approval to the DPL and it has put Dhangadhi in the world cricketing map,” he added.

National team skipper Paras Khadka, who is the strategic player of Biratnagar Kings, said the players were raring to participate in the tournament. “As Nepal has earned the One Day International status recently, all the players were excited to take part and perform in the DPL,” said Khadka, who was confident that Nepal would get first class status in near future.

Khadka lauded the DCA for bringing in corporate sector into cricket. “It is impossible to move ahead without the support of business houses. And the domestic cricket is alive only because of the tournaments which are organised by private sector,” he added.

Top two teams will receive Rs 2.5 million and one million rupees respectively. Similarly, teams finishing third and fourth will get Rs 300,000 and Rs 200,000. Player of the series will get TVS Apache 180cc motorbike, while the most valuable player will receive a golden shoe from Gold Star.

Meanwhile, DCA signed Flora Hotel as the hospitality partner of the DPL. DCA President Shahi and Managing Director of Flora Hotel Pushpa Raj Kunwar exchanged the memorandum of understanding at a programme in Dhangadhi.