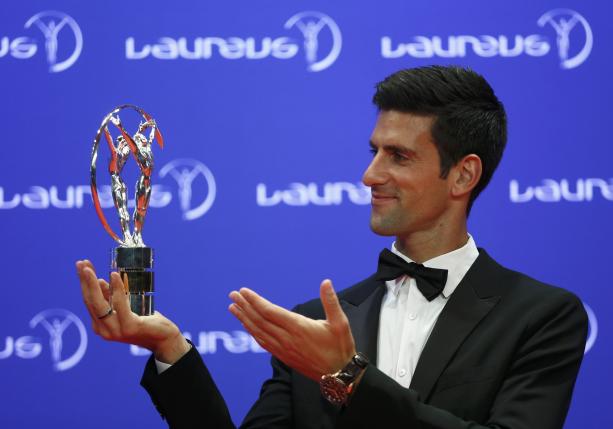 Tennis player Novak Djokovic of Serbia poses with his Laureus World Sportsman of the Year award during the Laureus World Sports Awards 2016 in Berlin, Germany, April 18, 2016. REUTERS/Hannibal Hanschke
Berlin, April 19 World number ones Novak Djokovic and Serena Williams completed a clean sweep for tennis as they won the Laureus Sportsman and Sportswoman of the Year awards on Monday. In a glitzy ceremony in the German capital, hosted by US actor Bill Murray, Serbia’s Djokovic beat Barcelona footballer Lionel Messi, sprinter Usain Bolt and Formula 1 champion Lewis Hamilton among others for the top men’s award at the annual ceremony. Djokovic and American Williams, who fought off competition from footballer Carli Lloyd and Jamaican sprinter Shelly-Ann Fraser-Pryce among others, were rewarded for dominating their sport last year, with each winning three of the four grand slams. Both athletes picked up the top prize for the third time, with Williams having previously won it in 2003 and 2010, while Djokovic was also victorious in 2012 and 2015. Golfer Jordan Spieth won the Breakthrough of the Year award after capturing his first two majors at the 2015 US Masters and US Open, while New Zealand’s All Blacks won Team of the Year award following their World Cup victory. There was some joy for the host nation as well with triathlete Jan Frodeno grabbing the Action Sportsperson of the Year prize. Dutch footballer and coach Johan Cruyff, who died of cancer in March, was posthumously awarded the Spirit of Sport award. His son Jordi received the award.
#Novak Djokovic #Serena Williams #top Laureus awards #Laureus Sportsman of the year #Sportswoman of the Year awards #US actor Bill Murray
You May Also like: