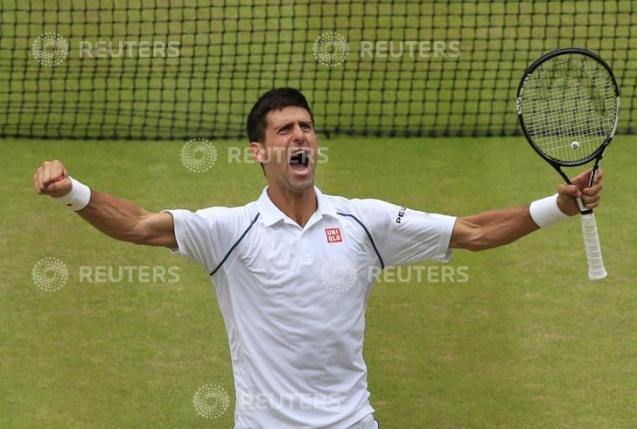 Novak Djokovic of Serbia celebrates after winning his Men's Singles Final match against Roger Federer of Switzerland at the Wimbledon Tennis Championships in London, July 12, 2015. REUTERS
Wimbledon champions and world number ones Novak Djokovic and Serena Williams head the field for the men's and women's events at this year's US Open, the United States Tennis Association announced on Wednesday. Djokovic, who has reached the US Open final five times and won the title in 2011, tops an elite list that includes other former champions in Roger Federer (2004-08), Rafa Nadal (2010, 2013), Andy Murray (2012) and last year's winner Marin Cilic. Serbian Djokovic will be aiming to land his third grand slam crown this year, having triumphed at the Australian Open in February before beating Federer in four sets in the Wimbledon final earlier this month. The US Open will be played from Aug. 31 to Sept. 13 at the USTA Billie Jean King National Tennis Center in Flushing, New York. Serena Williams will command much of the spotlight over that fortnight as she bids to become only the third woman to win the "calendar year" grand slam in the professional era. Aged 33, she outclassed Spaniard Garbine Muguruza 6-4 6-4 in the Wimbledon final earlier this month. It was a sixth Wimbledon title and a 21st grand slam crown for Williams and, unless she suffers a dip in form, it seems unlikely anyone can stop her march into the history books at Flushing Meadows where she is unbeaten since 2011. She won her sixth US Open last year, and has since landed the Australian Open, French Open and Wimbledon titles this season.Joining Williams will be Russian world number two Maria Sharapova, the 2006 U.S. Open champion; third-ranked Simona Halep of Romania and fourth-ranked Czech Petra Kvitova, the 2011 and 2014 Wimbledon champion.
#Novak Djokovic #US Open #Serena Williams
You May Also like: