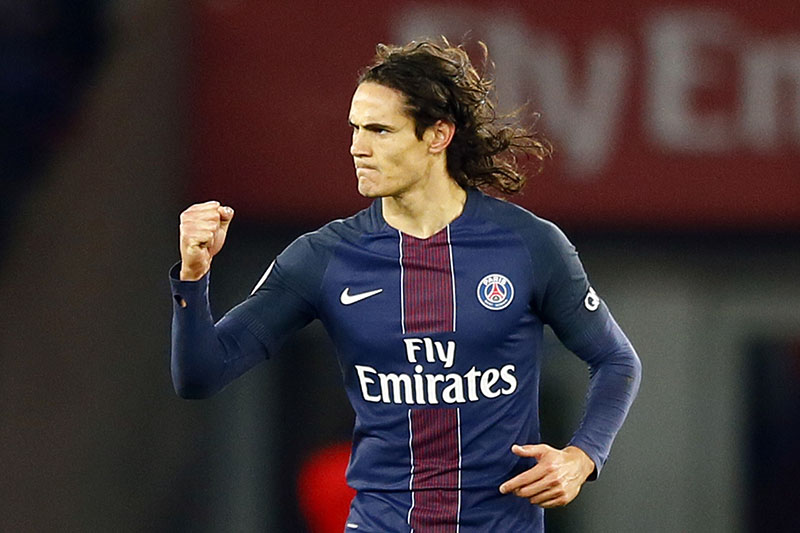 FILE- PSG's Edinson Cavani reacts after their first goal during their French League One soccer match between PSG and Marseille at the Parc des Princes stadium in Paris, France, on Sunday, November 6, 2016. Photo: AP
PARIS: With Edinson Cavani in this kind of rampant form, Paris Saint-Germain can feel more confident heading into its Champions League showdown with Barcelona. Cavani scored two expertly-taken volleys on Friday night as defending champion PSG won 3-0 away to Bordeaux to move level on points with league leader Monaco. With 10 wins in the last 11 games overall, PSG is in the best possible shape heading into Tuesday's home game against Barcelona. Since Zlatan Ibrahimovic left PSG in the summer to join Manchester United, Cavani has been unleashed in his preferred role at center forward. The Uruguay striker has nine goals in his last six games, 25 in the league and 33 overall this season. He is on course to shatter his personal best tally of 38, set with former club Napoli. Cavani's first came in the sixth minute, a crisp thump from outside the penalty area after Bordeaux failed to clear the ball properly. His second came just after halftime, as he latched onto a brilliant cross from the left by Angel Di Maria and clipped the ball with the inside of his foot into the opposite corner. Di Maria scored the other goal just before halftime and he is getting his form back following a tough start to the season. For that goal, Bordeaux lost possession and in three quick passes the ball had reached Italy midfielder Marco Verratti, who then played Di Maria clean through and the Argentina winger controlled the pass well with his left foot before dinking the ball over goalkeeper Cedric Carrasso's head with his right. Monaco, which has a significantly better goal difference than PSG, can restore its three-point lead with a home win against Metz on Saturday. Third-place Nice, which is three points behind PSG, is away to Rennes on Sunday with Nice striker Mario Balotelli doubtful.
#Champions League #PSG #Paris Saint-Germain #Edinson Cavani #Bordeaux #French Roundup
You May Also like: