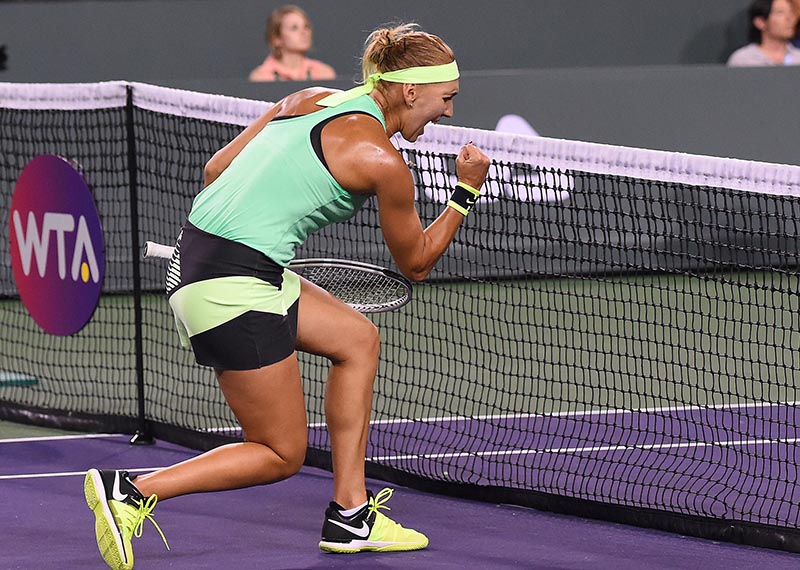 Elena Vesnina (RUS) reacts to winning a point as she defeated Venus Williams (not pictured) in the quarter final match in the BNP Paribas Open at the Indian Wells Tennis Garden, on March 16, 2017; Indian Wells, CA, USA. Photo: REUTERS
INDIAN WELLS: Elena Vesnina denied Venus Williams another comeback win, while Kristina Mladenovic roared back from a set and a break down to beat Caroline Wozniacki on Thursday to reach the semi-finals of the BNP Paribas Open at Indian Wells. Williams, who this week survived match points against Jelena Jankovic and was down a break in the third against Peng Shuai, fought off three match points in the eighth game and had six chances to bring it back on serve in the next before the 14th-seeded Russian finally held to finish a gutsy 6-2 4-6 6-3 win. The 30-year-old Vesnina, a Wimbledon semi-finalist last year, ripped a forehand putaway off a backhand from 12th seed Williams that clipped the netcord to end the two hour 11 minute battle in the California desert. "At the end of the match, I don't know how I won that game from 0-40," Vesnina, who had ousted second seed Angelique Kerber to reach the quarters, said in an on-court interview. "In the first set she was a little bit slow, missed some easy balls. But then in the second set, Venus was back and I was in trouble." Mladenovic, the 28th seed, continued an impressive run of form beating 13th seed and 2011 winner Wozniacki 3-6 7-6(4) 6-2 to reach her first Premier Mandatory semi-final and guarantee her debut in the Top 20 in next week's WTA rankings. The 23-year-old Frenchwoman improved to 16-5 on the season, a run which includes her first career title in St. Petersburg, and an appearance in the final earlier this month in Acapulco. "She's on fire. So am I," said Vesnina. "One of us can be in the final. We will see tomorrow." Mladenovic wasted a slew of opportunities, squandering nine break points as she fell behind 1-5 in the opening set. "I was very frustrated with the beginning of the match. I was hitting a lot of unforced errors," she said. Mladenovic recovered from an early break in the second to move ahead 5-3 before ultimately leveling the match 7-4 in the tiebreak. Painting the lines in the third set, Mladenovic broke twice and served out the two hour 33 minute win. Third seed Karolina Pliskova of the Czech Republic will meet eighth-seeded Russian Svetlana Kuznetsova in the other women's semi-final.
#Venus Williams #WTA rankings #semi-finals #Elena Vesnina #BNP Paribas Open #Indian Wells #Kristina Mladenovic #14th-seeded Russian #12th seed Williams #28th seed
You May Also like: