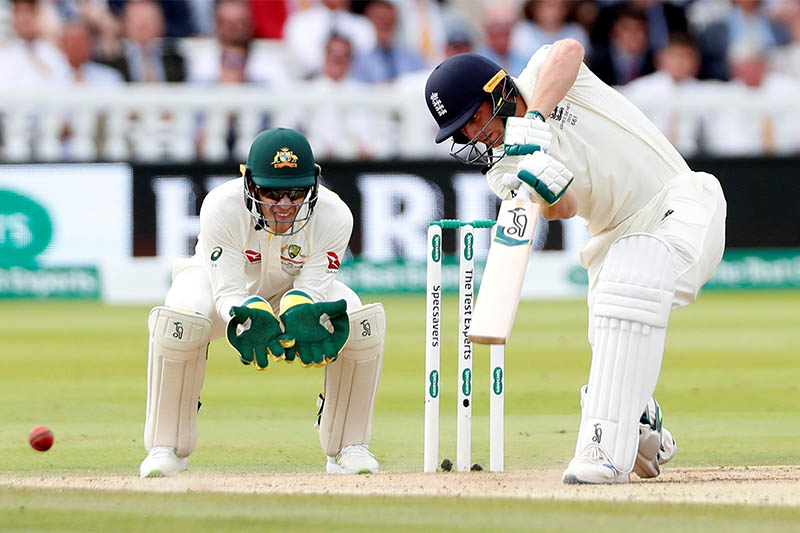 England's Jos Buttler in action. Photo: Reuters
LONDON: England grafted to 157 for four and led Australia by 165 runs at lunch on the final day of a compelling second Ashes test at Lord's on Sunday. Ben Stokes moved on to 51 not out with Jos Buttler on 31, the pair adding 61 runs after the start was delayed by over an hour due to more of the rain which has disrupted the match. Australia, 1-0 up in the series, confirmed that batsman Steve Smith will play no further part in the game due to concussion symptoms. Smith was struck on the neck by a Jofra Archer bouncer during his innings on Saturday and forced to retire hurt. Although he returned to the crease and added 12 runs before being dismissed for 92, he awoke feeling groggy on Sunday morning and was ruled out of the match. Resuming on 96-4, Stokes and Buttler played cautiously but dispatched the odd loose delivery to the boundary under sunny skies at the home of cricket. Stokes, dropped by David Warner at slip off Nathan Lyon on Saturday, brought up his 19th test fifty, off 106 balls, as England began to play with more freedom before the interval. All results were still possible and Australia must cope without the prolific Smith, who made 144 and 142 in their emphatic first test victory, in the second innings as they continue their bid to win the Ashes in England for the first time since 2001. READ ALSO:
#Joe Root #Steve Smith #Ashes series #Ben Stokes #Jos Buttler #Tim Paine
You May Also like: