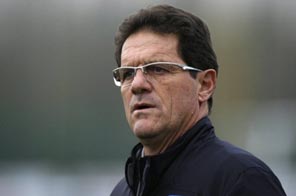 England manager Fabio Capello attends a training session in 2009. Capello's England squad will travel to Austria for a training camp at altitude prior to the 2010 World Cup in South Africa, the camp's organiser said Tuesday. Source: AFP

VIENNA: Fabio Capello's England squad will travel to Austria for a training camp at altitude prior to the 2010 World Cup in South Africa, the camp's organiser said Tuesday.
"We have organised the camp in conjunction with the English Football Federation (FA)," said Nikolaus Pichler, a representative of the IFCS company which organises training camps for professional teams in the region of Styria.

"The team manager Fabio Capello be there with the team in Irdning, which he is already familiar with. He has already visited here with other teams, such as AS Roma and Real Madrid."

The exact dates of England's stay will be announced soon, added Pichler, who said he is negotiating with two other national teams interested in setting up camp in Styria.

Serbia and South Korea have already booked stays for the end of May/beginning of June while Germany and the Netherlands are said to be considering the option.

England, who won their sole World Cup in 1966, face the United States, Algeria and Slovenia in Group C in the opening round.

Seven of South Africa's 10 World Cup stadiums - including the venue for the final, Soccer City in Johannesburg - are at altitude.

This has prompted many teams to prepare their players properly for the demands of several thousand feet above sea level.

#England set for pre-World Cup altitude camp in Austria
You May Also like: