Federer cruises into second round of US Open 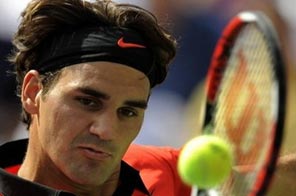 NEW YORK: World number one Roger Federer began his quest for a sixth consecutive US Open title and 16th Grand Slam singles crown by overpowering US teen wild card Devin Britton 6-1, 6-3, 7-5.
The Swiss star, who completed a career Grand Slam by winning the French Open and set a career record with his 15th Slam title at Wimbledon, became the first player to crack 50 million dollars in career prize money with the victory on Monday.
Federer, seeking his 62nd career title, advanced to a second-round match with 65th-rated German Simon Greul, who ousted 182nd-ranked Ecuadoran qualifier Giovanni Lapentti 6-3, 4-6, 3-6, 6-0, 7-6 (11/9).
"It was a good start," Federer said. "Tricky match for me, playing a guy who's got absolutely nothing to lose."
Britton, the 1,370th-ranked US college champion who lost his only prior top-level match, was outclassed from the start at Arthur Ashe Stadium.
"Everything he does is unbelievable. He's the best. No weakness," Britton said. "I mean, I didn't know what to do. It was a little overwhelming."
US fifth seed Andy Roddick and Russian eighth seed Nikolay Davydenko also reached the second round with straight-set triumphs on the first day of the year's last major tournament.
Roddick fired 13 aces and connected on 81 percent of his first serves to oust Germany's 84th-ranked Bjorn Phau 6-1, 6-4, 6-2, in 95 minutes. Serving had been a concern after some lackluster performances in US Open tuneup events.
"That's a welcome sign," Roddick said. "Hopefully I can keep it going."
Roddick will next face 81st-rated Frenchman Marc Gicquel, who eliminated Russia's Dmitry Tursunov 6-2, 5-7, 6-3, 6-3.
"I have no reason to look past my next match," Roddick said.
Davydenko, a 2006 and 2007 US Open semi-finalist, beat 222nd-ranked German qualifier Dieter Kindlmann 6-3, 6-4, 7-5 and next faces Czech No. 70 Jan Hernych, who ousted Germany's Rainer Schuettler 1-6, 7-6 (7/5), 6-4, 2-6, 6-3.
"It's very important to find your game here for the next round," Davydenko said. "Being two times in the semi-finals here has been great for me."
Top seed Federer, a semi-finalist or better in the past 21 Grand Slams, improved to 48-7 in 2009 with his 36th consecutive US Open match victory, including one walkover.
Federer, who has not lost on the Flushing Meadows hardcourts since David Nalbandian beat him in the round of 16 in 2003, seeks to match US 1920s-star Bill Tilden's modern Grand Slam and tournament record of six titles in a row.
"It's amazing. That's what I'm here for, trying to equal Bill Tilden's record," Federer said. "It's fantastic to be compared to someone who played such a long time ago."
After reclaiming the top ranking from Rafael Nadal with his Wimbledon title, Federer can keep the spot by reaching the US Open's fourth round. An earlier exit opens the door for Nadal or Britain's Andy Murray to become number one.
Federer won 12 of the first 13 points over Britton, holding serve twice on his way to a 3-0 lead after only five minutes and cruising even after falling behind by a break in the second and third sets.
"He had some very good spells and I had to make sure from my side that I stayed with him and come back because I was down a break in the second and in the third, so it was good to still get through in three sets," Federer said.
Britton, 18, dropped the first set in 18 minutes but broke for a 3-1 lead in the second, only to have Federer break back immediately.
"I was thinking, 'I'm up a break. This is exciting,'" Britton said. "It was fun for that 10 or 15 seconds until he broke me at love. It was probably the best seconds of my life."
Britton broke Federer in the seventh game of the final set only to have Federer break back in the next game.
"He looks unbelievable on TV but playing against it was even tougher," said Britton. "It was so scary. I was pretty scared."
Federer broke again in the final game, claiming the match on a crosscourt forehand winner.
"His forehand is just crazy," Britton said. "I tried to keep it away, but sometimes I just hit it there just to see it. It's really pretty to watch."
Tuesday's schedule finds Scottish second seed Murray, the 2008 US Open runner-up, starting his bid against Latvian Ernests Gulbis. Serbian fourth seed Novak Djokovic opens against Croatian Ivan Ljubicic.

#Federer cruises into second round of US Open
You May Also like: