Federer yet to commit to Aussie Kooyong Classic 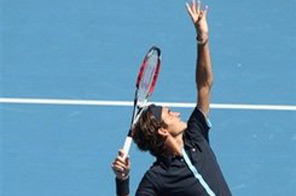 Roger Federer of Switzerland is seen here serving at the invitational Kooyong Classic tournament in Melbourne, in January. Federer is yet to decide if he will use the next Kooyong Classic to fine tune his Australian Open preparations, according to organisers. Source: AFP

MELBOURNE: World number one Roger Federer is yet to decide if he will use the Kooyong Classic in January to fine tune his Australian Open preparations, organisers said Wednesday.

Tournament director Colin Stubs said Federer had not finalised his plans for the season-opening Grand Slam due to the birth last July of his twin daughters Myla and Charlene.

Stubs said top 10 players Novak Djokovic, Jo-Wilfried Tsonga and Fernando Verdasco had all committed to play in the eight-man exhibition but Federer would make a decision closer to the event.

"I have been asked by Roger to keep a spot open for him in January's field naturally, I would do so and clarity is not expected until early in the New Year," Stubs said.

Fernando Gonzales, Robin Soderling, Tommy Haas and Marco Baghdatis will also take part in the event, with Stubs saying he had fall-back options if Federer chose not to play.

#Federer yet to commit to Aussie Kooyong Classic
You May Also like: