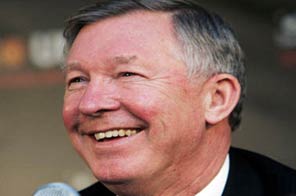 MANCHESTER: Sir Alex Ferguson believes former Liverpool striker Michael Owen has it in him to heap fresh misery upon the Reds when he returns to Anfield with English champions Manchester United on Sunday.

The 29-year-old made his name on Merseyside by scoring 158 goals for Liverpool before joining Real Madrid for an ill-fated spell in Spain.

Injuries then diminished his impact at Newcastle, who were relegated from the Premier League last season and it was a surprise to many when Ferguson brought him to Old Trafford before the start of this campaign.

Owen's transfer to their fiercest rivals will not sit well with Liverpool fans and their mood is unlikely to be improved if their one-time hero condemns Rafael Benitez's side to a fifth straight defeat.

The England forward struck a dramatic derby winner against Manchester City last month and Ferguson said that if he repeated the trick against Liverpool, Owen's place in United folklore would be secure.

"He is only just starting with us. He has only been here a few months and I hope the boy is here for a long time," the Scottish boss added.

"I think he is well capable of doing that. He is showing he is a terrific professional, he lives his life the right way and there are no complications with him," Ferguson added.

Although Owen has mainly been used as a substitute by Ferguson, he could start at Anfield after fellow England forward Wayne Rooney sustained a calf injury during the midweek Champions League victory away to CSKA Moscow.

"When he (Owen) came on Wednesday, I think he did very well, his movement troubles opponents," Ferguson said.

"There is nobody better at holding the line in the last third than him, he is very seldom offside.

"That is experience, of course, but also talent."

"Michael is capable of scoring in any type of match at the highest level," Ferguson added. "He has proved that, we knew that.

"Looking at his CV, I think any club in the world would have taken him.

"The issue was his playing record over the last two or three years and that obviously put some clubs off.

"But I spoke to one or two people about him - Nicky Butt (the former United midfielder who joined Newcastle) was almost forcing me to sign him, he had so much good to say about the lad.

"I think it was good advice and I took that on board."

Rooney was due to have his fitness assessed on Saturday, the former Everton striker's 24th birthday.

#Ferguson banking on Owen's big-match record
You May Also like: