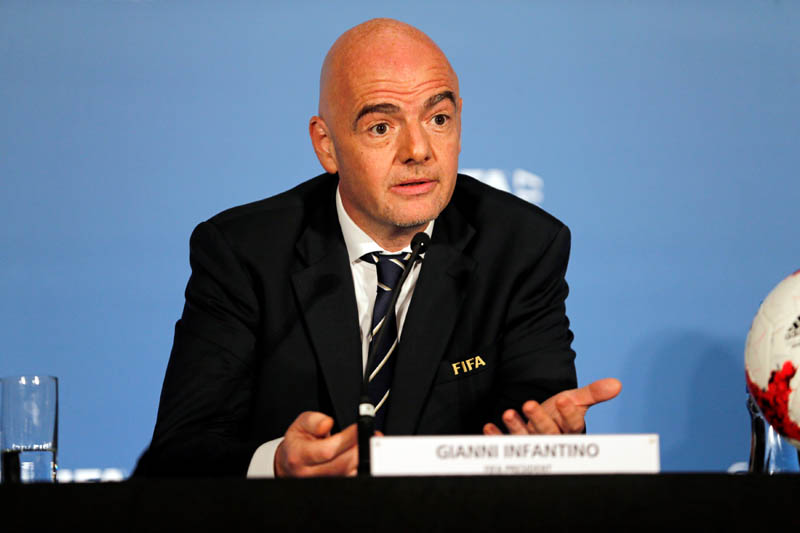 FIFA President Gianni Infantino speaks at press conference after the 67th FIFA Congress in Manama, Bahrain May 11, 2017. Photo: Reuters
ZURICH: FIFA president Gianni Infantino will not face a challenger in June's elections to the head of world soccer's governing body, the organisation said on Wednesday. "Following the call for election issued by the FIFA Council on 10 June 2018, FIFA's member associations have proposed, in due time and form, the following candidate for the presidential election to take place at the 69th FIFA Congress in Paris on 5 June 2019: Mr Gianni Infantino," it said in a statement. Infantino's plans for a new expanded Club World Cup and a global Nations League tournament have put him at loggerheads with European confederation UEFA and club organisations. However, no candidate from Europe emerged to challenge Infantino, the former UEFA General Secretary, who was elected in February, 2016, replacing the banned Sepp Blatter. The Swiss official beat Asian Football Confederation President Sheikh Salman bin Ebrahim Al Khalifa of Bahrain in the final round of that election after Jordan's Prince Ali Bin Al Hussein and Frenchman Jerome Champagne had been eliminated. Infantino owed his candidacy to the fact that Europe’s preferred candidate, his former boss and UEFA president Michel Platini, was banned from football along with Blatter for ethics violations. Both men have denied wrongdoing. UEFA will hold their own elections at their congress in Rome on Thursday where incumbent, Slovenian lawyer, Aleksander Ceferin is unopposed.
#FIFA #Gianni Infantino
You May Also like: